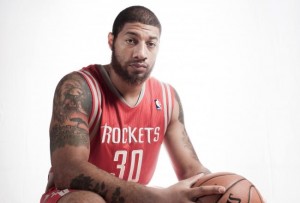 Rookie forward Royce White has missed numerous team practices of late, and the Houston Rockets have elected to send him down to their Development League affiliate squad.

The absences are unexcused, and given White’s difficult transition into the NBA due to his anxiety disorder, there are no easy answers here.

Rockets acting coach Kelvin Sampson said he did not know why White did not attend Tuesday’s practice and did not speak with him Monday, when Motiejunas and Machado were told of the plans to send them to the Rio Grande Valley Vipers. But Rockets owner Leslie Alexander said there have been “internal repercussions, which I’m not going to talk about.” More foreboding, Alexander’s confidence in White’s long-term prospects seem shaken since he expressed enthusiasm for White’s potential during the summer league in Las Vegas. “That’s tenuous,” Alexander said. “It’s tough to talk about something like that. I think we’re going to handle it internally. If he doesn’t work out, well, it’s tough to lose a draft choice.”

In a statement Tuesday, White seemed to blame the Rockets for failing to live up to agreements to help him manage his battle with anxiety. […] “In hindsight,” the statement said, “perhaps it was not a good idea to be open and honest about my anxiety disorder — due to the current situations at hand that involve the nature of actions from the Houston Rockets. As a rookie, I want to settle into a team and make progress; but since pre-season the Rockets have been inconsistent with their agreement to proactively create a healthy and successful relationship. At this point, the Rockets are aware of my position and the reason for my absence, any other response is inaccurate. This is important to me, it is a health issue. I must advocate for my rights, it is a player-commodity league — the failure to meet my requests for support will end with me being unhealthy and that is not a consequence that I am willing to accept to play any sport.”

White — who had more to say about this incident on his Twitter page — didn’t skip practices or games at Iowa State because of his condition, but he missed a week of training camp for the Rockets, and this latest absence will not help matters any.

The Houston Rockets, though understandably frustrated, say they will continue to support Royce White.