The Feds Are Looking into Lindsey Hunter’s Business 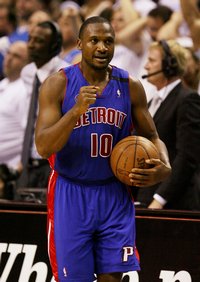 On top of dealing with the shifty guards of the NBA, Lindsey Hunter, the Detroit Pistons veteran, must also answer questions from the Feds. A business deal went awry, according to the plaintiff, and the FBI is very much interested in the role played by Hunter.

The FBI, on the other hand, according to sources close to its investigation, has him as its main focus and as a leading participant in at least two possibly fraudulent deals that went awry.

To Bruce McClellan of Waterford Township, a boiler operator with the Pontiac Schools, there is no doubt about Hunter’s role. McClellan said he is cooperating with the FBI investigation and told the agency that he was a willing but naïve straw buyer in the purchase in April 2007 of a home at 1718 Morningside Way in Bloomfield Hills for $1.25 million, a home that is back on the market now for $780,000.

I’m not a lawyer, obviously, but I’m guessing that it’s probably not a good thing when the FBI gets involved in your business matters.

Anyway, you should really take the time to read the whole article; all kinds of interesting tidbits in there.