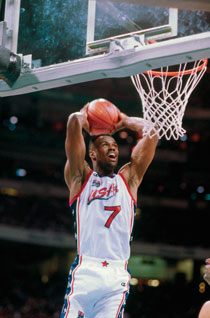 There still are people who clown David Robinson. Their hate was there before he was a rookie. When he chose to fulfill his commitment to the Navy instead of jumping to the NBA. The hate continued. When he won the ROY. When he was handed the MVP. The DPOY. A pair of championship trophies. Undoubtedly, some refused to clap when the Hall of Fame inducted the Admiral this past week. Why? Scoop told it in the pages of SLAM 65, as one of the League’s classiest individuals made his farewell tour. Enjoy!—Ed.

David Robinson. Sell Out. In so many ways. That’s where the mind goes when the name comes up. Trivial shit: the way he talks, enunciates his words, his posture, his haircut, his style of play, the way he dresses, his void of controversy and drama, his marriage, his personality, his Naval background, his recent playoff efforts versus the Lakers, his one-point Olympic performance in ’88, the fact that he plays classical piano instead of jazz, the quote years ago in GQ where he said that basketball wasn’t the most important thing in his life, the wholesome, All-American lifestyle, his un-thugness, his oncourt demeanor, the perceived softness. Even this magazine is guilty of it: Even though he is, based on his career accomplishments, undeniably one of the 50 greatest players ever, David Robinson (along with John Stockton, Karl Malone and Charles Barkley, for different reasons) has never graced a SLAM cover. No, never that.

Here’s a little story that needs to be heard: Back in 1991 at a predominantly minority grammar school in the lower east side of San Antonio, David Robinson walked into a fifth-grade classroom and for no other reason, strictly out of love, promised to give each and every one of the 92 kids in that class $2,000 when they graduated from high school. DRob didn’t know these kids. He hadn’t gone to that school as a young’n, his kids didn’t go there. This was a straight gesture of “looking out” from a brotha who had the country questioning his heart, soul and blackness.

Between drugs, drive-bys and drop outs, jail, pregnancy, poverty and all of the other elements that end too many minority lives too soon, only 30 of the members of that class ever saw their high school graduation. But unlike Jesse Jackson when he ignites a boycott, DR didn’t just stop at the promise. For the last 11 years, he has kept his word with the members of this class by providing not only tutors and mentors, but also by sending them on trips to various colleges and universities (incentive) and throwing Christmas parties at his mom’s crib for them every year they stick with the program (love). He went back each year to visit as they advanced in grades. He showed up for their graduation to congratulate them. And of those who did finish, the money

he gave them went up to $8,000 per—strictly because Robinson was more concerned about the gross than the net. And here’s the killer: Apparently, this isn’t the only school he’s done this for.

So what does this have to do with basketball? Nothing. But neither do the reasons why Robinson doesn’t get the same respect as Alonzo Mourning now or Patrick Ewing then, all of the unjustifiable reasons listed above. The public’s acceptance (or lack) of David Robinson has been about aesthetics, nonsense that truly makes no sense. We’ve spent the past 14 years wanting and waiting for David Robinson to be something that he’s not, wanting him to be “down”—down with us, or down for the cause. And all the while, Robinson was “down” with simply keeping his mouth shut while he put little black and Hispanic boys and girls he didn’t even know through school. Giving them hope. In the words of the great Schoolly D:

Is that black enough for ya?

As he uses the ’02-03 NBA season as his farewell tour (having announced his impending retirement over the summer), DRob will, assuming good health, play like a madman; like he’s 27 instead of 37. At this point, he has nothing to lose. He’s heard the whispers, he’s heard the loud voices, and there’s nothing more left for his critics to say. So with that, he will play. And when he falls out on the court, almost bleeding internally with the game ball clutched in his hands, that’s when it will hit us; that’s when we’ll realize how gangsta he really was.

We’ll remember the MVP, the ROY, the Defensive Player of the Year, the ring, the years he had to carry the Spurs’ franchise on his back, shoulders and neck, hardly ever missing the playoffs. We’ll remember the 20,244 points, 9,989 rebounds, the 2,843 blocks—and counting—all franchise records. That’s when we will recognize that Avery Johnson was right all those years when he said,

“Five-Oh is the best center in the League,” or that Tim Duncan was right for not leaving San Antone so he “can finish playing alongside David.” That’s when we’ll truly recognize the 71-point game, the scoring title, and all the rest. As he is carried off the court, still not letting the ball go, we will look at his face and see the joy and pain of his life of criticism and celebrity. That’s when we flash back to those legendary “Mr. Robinson’s Neighborhood” commercials. That’s when we’ll take back everything we said about him being “scared” to play against Shaq in last year’s playoffs once we realized that he had received epidurals for back pain—something that no man reading this could endure. That’s when it will sink in that David Robinson ain’t their n*gger, he’s our n*gga. We just hope on that day, it’s not too

So, if David Robinson doesn’t win another championship, never gets over or past the Lakers playoff series two years ago or Hakeem’s possessed, confidence-shaking performance on him back in ’95, if he never gets the credit on the streets that Darius Miles or Allen Iverson has, it should not affect his legacy as a ballplayer, a Nate Thurmond or Artis Gilmore-like icon of this generation. And it should not overshadow the contributions he’s made to so many kids that have made him more of a man than most of the players who get the big jersey sales will ever be.

But there is one thing that would be great to see, even though it’ll never happen: After his last game, at the press conference before he walks off the podium, to see him turn, grab Jim Gray or Craig Sager’s microphone, look dead into the camera and say to all of us self-righteous, blacker-than-thou, loving-Malcolm-X-instead-of-Dr.-King, liberal-Republican haters, to “kiss his natural black ass.” He’s earned the right to say it. And we, ignorantly, earned the right to be told.