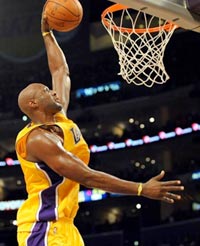 This was published in SLAM 138, but given Lamar’s inspired play of late and the unfathomable stupidity of Amar’e Stouemire’s (I left the ‘d’ out on purpose, as should you…) statement that Odom is merely “lucky,” this seemed as good a time as any to rerun it…

This is the mantra of Phil Jackson, the Zen Master, he of the ten rings and unflappable demeanor. It’s allowed him to gain control by relinquishing it, guiding him to and through June after June, when his players mettle is truly tested. It’s the essence of his genius.

And it belonged to one of his players first.

Seemingly since his first breath, Lamar Joseph Odom’s name has been associated-if not synonymous-with tragedy. Born and raised in Queens, Odom’s absentee father was addicted to heroin and his mother raised him for only twelve short years before succumbing to cancer. Left to the care of his 76 year old grandmother Mildred, it should be a wonder he made it out of the neighborhood, much less to the NBA. But these days an athlete emerging from such dire straits has become cliché. Unfortunately, life would require far more of him.

Mildred lived to see her grandson fulfill his dream before passing away in June of 2003 and in a sad twist of fate, his 6 ½ month old son Jayden joined her exactly three years later. Lamar was robbed by gunpoint -and fired upon- in his old neighborhood weeks after the funeral. He was in a car accident a few months after that. Then a month into the season, he was sidelined with injuries. There was unceasing change alright, but it was invariably bad. Still, he handles it all, swallowing each dose of life’s harsh realities with remarkable aplomb.

“Some of the things I’ve been through, a lot of people wouldn’t have been able to stick it out, mentally. Or they’d use it as an excuse to give up and stop fighting. So many things have happened to me but I wouldn’t do anything over, because if I did, it wouldn’t be my story. It’s what makes me a unique individual. ”

It’s a healthy perspective that’s made him not the best, but most popular Laker amongst his teammates and the media alike. However, it doesn’t align with the lofty expectations we’ve had for him since his rookie year. As easy as Lamar makes it look to maneuver through hardships, he moves even more gracefully on a basketball court; a 6’10” forward who denies centers, flusters guards, inhales rebounds, ignites fast breaks and conducts the game’s most complex offense. His skill set is nothing short of an absolute rarity. So just as life did, we demanded far more of Lamar Odom.

The promise of endless accolades never came to fruition for him and today, at the ripe age of 30, they’ve been replaced by dubious distinctions. Now in his sixth year as a Laker, Odom is probably in contention for a mantle full of ‘Best Player to Never’ awards. All-Star, Sixth Man, Most Improved, You Name It. Well, all except one of course. Yet even after sacrificing minutes-during a contract year-in contribution to a Championship, he’s still pestered with questions of his assertiveness. Seated in front his locker before a February matchup with the Celtics, Odom just shakes his head.

“I’m the only dude in the NBA who can grab 18 rebounds and people will still say ‘You weren’t aggressive enough’. I’ve been dealing with that for a long time. I get 11 assists, people are like, ‘Why didn’t you shoot more?’ If I get a triple double and I only have ten points it’s ‘You should’ve’… That’s something I’ve been going through my whole career. All I can do is be Lamar.” In the midst of a pivotal five game stretch without Kobe Bryant, Lamar just being himself was more than enough for everyone; 22 rebounds and 6 assists in Portland, 16 points and ten rebounds against San Antonio, then 25 points and 11 more rebounds in Utah. All Laker wins. But then he ‘only’ had 9 points and 18 rebounds in another victory over Golden State. Odom realizes there will be whispers, and they’ll remain just that to him.

“I never really paid attention to them. I worry about being a good father and sending my kids to college more than stigmas people might have on me as far as being a basketball player. I’ve been through so many different things and I’ve always felt that I’m more than just a basketball player anyway.”

He’s right though. Now he sells tacos. Energy bars too. In the past six months he’s become a reality television star and a tabloid staple. This is in addition to the clothing line, music label and acting gigs he already had on the side. He’s damn near a household name. But Lamar was more concerned with the opportunity for stability than a higher Q Rating when he married Khloe Kardashian last September.

“Family is important to me and her family is very strong. That was something that drew me to her. I have children from a previous relationship and she knows what it’s like to have a stepfather along with her sisters, so that’s definitely a reason I gravitated towards her. She understands family in the truest sense of the word.” He’s a championship athlete, corporate pitchman and budding entrepreneur. But above all, Lamar Odom-father and newlywed-is happy. Quiet as kept, his production is also up as he’s averaged a double double off the bench this year. So shouldn’t everyone else be happy with him?

The Lakers lost by the slimmest of margins to Boston that evening, 87-86, after some clock mismanagement and a botched last second attempt. It was clearly a night in which they could have used Kobe Bryant, he of the jutting jaw and steely eyed determination. But it should also be quite clear that they need Lamar Odom too. Just as he is.

13 points, 14 rebounds and 3 assists. Another tantalizing box score. He always leaves us wanting more, when by now we should be happy with whatever we get. The opportunity for him to be a franchise player is gone. Second in command too. More importantly, that’s not what’s needed of him anymore. So shouldn’t we stop expecting it? If only we could all move on as well as Lamar does. Learn to accept life’s ebb and flow from game to game. It’s probably the only reason he has anything left to give. Instead of expecting him to duplicate the iron will and insatiable hunger of a Superstar, we should applaud his selflessness. Instead of lamenting the fact that he’s never been an All Star, we should applaud his willingness to seamlessly incorporate his talent into a roster full of them.

The only desire lacking in Lamar is to compete with his own teammates. He understands the embodiment of a competitive spirit is a player who will do whatever it takes to win. Sometimes that may mean doing less.

“I play basketball. I’m not a scorer or a rebounder or a shooter or defender. I play a complete basketball game and that’s what I look to do every game. That’s the strength of my game, my versatility. Whatever slot they need me to fill, I fill it.”

There is only one goal every player in the NBA should have in common; to win a championship. In a league of more than 400 men, there simply aren’t enough max contracts and MVPs to go around. But anyone can win a ring. With the right attitude, of course. Maddening as he may be, the league-and the world for that matter-needs more people like Lamar Odom. The Los Angeles Lakers are a favorite to be in this year’s Finals and should they repeat, June may still be a bittersweet time for Lamar. While it’s an opportunity for him to remind us he still has talent possessed by few others, it’s also a reminder to him of those who won’t be watching. But no matter what changes may come, one thing is for certain.

He can handle it.