The Links: Amare beefs with the Suns, Big changes in Seattle 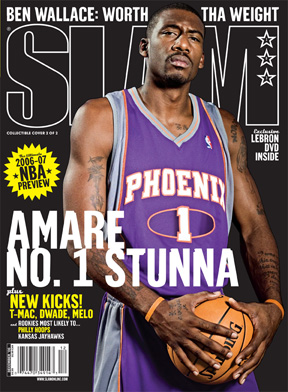 Let’s get right to it today…

QUOTES OF THE DAY
“I called my mom and told her and she started crying.” — Marvin Williams, on breaking his hand.

“It’s been suggested we have any of them involved call their mothers and tell them where they were. Think about it — that’s an interesting possible remedy. They’ve got say, ‘Mom, you’ve got to know what led up to this.’ … Personally, I think they were someplace they shouldn’t have been at a time they shouldn’t have been.” — Larry Miller, owner of the Utah Jazz, on his players getting in trouble in Portland.

“It’s tough for me to say this in a nice way, but I really do not care what goes on over there at all. They could have a great season and be one of the best or they could have an unfortunate season that ended (like) last year. I do not care. I’m not going to lose any sleep, I’m not going to gain any sleep. They have a lot of talented players. They have a good coach, so it’s for them to worry about.” — Richard Jefferson, on the Knicks.

“I’m not going to take that. He was insulting my race, my family, my integrity. For him to call me a monkey, Mutombo the monkey, that should not happen today. I will call the commissioner myself to tell him. I hope they don’t allow him to come back. It’s the first time in 16 years that has happened. If I get fined, I will go straight into the stands the next time and f*ck somebody up.” — Dikembe Mutombo.

THE LINKS
• David Aldridge tackled this last night on TNT, and it’s still festering in the Arizona papers today: Amare Stoudemire thinks he could use a few days off, while the Suns think he could be working harder. All I know is that in the clip they showed on TNT he looked nowhere near the old Amare Stoudemire — even Linkstigator Pat Burke was dominating him.

• More details on the Jazz/Hotel/Investigation thing are leaked today, thanks to Jazz owner Larry Miller of all people. According to Miller between 2 and 4 Jazz players were out in Portland when a woman followed them back to their hotel The woman wanted to come up to their room, they didn’t want her to come to their room, and she went into hysterics. Miller wonders if she was trying to set the players up.

• After helping run the Sonics into the ground the last few years, Wally Walker has resigned as team president. The really tragic news, however, is that Rob Swift tore his ACL and is out for the season. He’s going to be so bored over the next year that he might return next season completely covered in tattoos.

• Kobe is listed as “questionable to doubtful” for the season opener on TNT against Phoenix on Tuesday, which means you better believe he’s playing.

• A fan spouted off to Dikembe Mutombo, allegedly dropping in a racist epithet. Mutombo spouts back.

• Just as Marvin Williams goes down, it looks like Bogut could return in time for the season opener.

• Could new Wizards center Darius Songaila be out through December?

• Luke Jackson, we hardly knew ya.

• I love this picture in the Times article about Marbury and Francis. Francis looks like he’s sitting on a hot stove or something equally uncomfortable.

• Here’s a bunch of words to tell us that Jay-Z owns the Nets and it’s a little strange that he’s on the TNT ads.

• Some of the Sixers players pumped free gas for their fans. Somehow I have a feeling that Allen Iverson wasn’t a part of this promo.