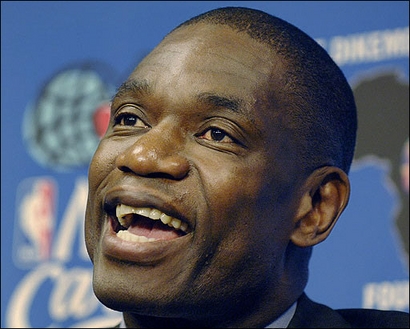 Got something else big coming later today. Links first…

QUOTES OF THE DAY
“I can’t find anything wrong. I wouldn’t trade my job for anything in the world.” — Mike D’Antoni.

“I was mad at him. He’s played like four (crappy) games in a row. I just wanted to slap him and figured that was the way to do it — just not play him in a game.” — Don Nelson, on Matt Barnes.

“Why are we having these questions? My guys are fine. There’s nothing to talk about if you guys aren’t (starting it). T.J. doesn’t have a problem. Jose understands his role. I’m not going to talk about that.” — Sam Mitchell.

“Dwane was doing a great job there.” — Mike Woodson, upon hearing of Dwane Casey being fired in Minnesota. Does this mean there’s another Dwane coaching a team in Minnesota that we don’t know about?

THE LINKS…
• Why was Dwane Casey fired? The T-Wolves were the the 8th playoff seed, after all. The Sonics players wonder if he didn’t get along with someone in the Minnesota front office.

• I like this story because the headline says “Bulls Win Tenth In A Row Over Hawks,” while the top of the web browser reads “Bulls win ninth in a row over Hawks.” So apparently my web browser is just a little more optimistic about the Hawks than the truth. And that’s fine with me.

(I do like that someone in the Hawks locker room suggested writing “Keep Your Middle Finger In Your Pockets” on the dry erase board.)

• For the first time in my life, last night I received three text messages all at the exact same moment. Why? Dikembe Mutombo was on the State of the Union address. I think it was something about senior citizens and healthcare. I didn’t see it — was watching Howard Stern On Demand.

• You guys can all keep talking about the Suns, but how about the Mavs? They played Dirk at point guard last night(!) and busted the Magic. Dirk nearly finished with a triple-double.

• Then again, it’s pretty easy to go on and on about the Suns when they play like they did last night. I watched most of this one and they were perfect in the first quarter. Nash finished with as many assists as the Wizards.

• LeBron has signed up to shill for Microsoft. And the rich get richer.

• Carlos Arroyo says even though he’s riding the pine, he doesn’t want Orlando to trade him. The story also says Carlos “discounted a rumor that he had gome on a local TV or radio station and asked the Magic to trade him.” Wait — either he did or didn’t go somewhere where they record your words and ask for a trade. That seems like it would be pretty easy to prove, doesn’t it?

• Everyone in Memphis is all shaky about the Gasol trade. This story carefully points out that Gasol didn’t demand a trade, but he did ask to be traded. Is there really a difference?

• One of my favorite columnists in the world, Jerry Green, is upset that the Magic aren’t talking about the Arena Football Team during their arena negotiations. I could look at his picture all day. The second page of his column is even better, when Jerry lectures us about comedy.

• Sam Mitchell snaps before a reporter can finish his question. We love you, Sam.

• Bulls GM John Paxson says they need someone who can score in the post. OH, YOU THINK?

• I watched a bunch of this Clippers/Bucks game last night for some reason. Yes, it was exactly as boring as it sounds.

• Looks like Chris Paul is about two weeks from returning.

• Wayne Embry has kissed and made up with the Cavs. Hopefully he can teach Drew Gooden how to throw some outlet passes while he’s back in Cleveland.