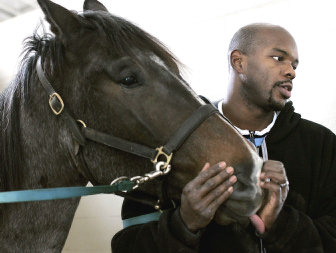 Went to the Suns/Knicks game last night, which wasn’t much of a game. The Knicks kept it close but it never felt like the Suns were going to lose. Jake’s notes are here, and he ran the picture I sent him of our press table when a huge glass of coke got loose up there. Khalid, Ben and I were all sitting in the upper press box, way up high. And next to us at the table was a guy and a girl, who looked like they may have been on a date. The guy looked almost exactly like Hawks GM Billy Knight. Anyway, the guy went to the concession stand before as the second half started, and then he came back and set his food down and the coke — a huge, huge glass of coke — immediately fell over and went gushing all over the place.

It spilled away from us and toward homeboy’s date. Homeboy immediately took off running, we assumed to get napkins. (It’s even funnier if you imagine Billy Knight doing all this.) The coke started settling and then started rolling down the table toward us. We grabbed our bags and phones off the table and scooted away from the press table, and some man behind us handed us a ton of napkins that we used to attempt to blot everything up.

About ten minutes later, homeboy returned with another huge coke and about three napkins. He handed the napkins to his girl and she said, “This is all you brought?” Yep. But at least he got another 200 oz. coke!

Later, Khalid pointed out that if they were on their first date, it wasn’t a very promising situation.

QUOTES OF THE DAY
“I ain’t cutting it at all.” — Rasheed Wallace, asked if he’d consider having surgery on his arthritic ankle.

“It’s hard to explain the feeling you get when you’re on a horse. I just get a true pleasure, a sense of being at peace. No matter if the horse is having a good day or a bad day, I really feel at peace with him.” — Marc Jackson.

THE LINKS…
• Today’s must-read story is this feature about Hornets center Marc Jackson and his love of horses. He describes horses as “a fantasy.” Is there anything else I could say to get you to read this?

• The Western Conference All-Stars will be coached by Phoenix coach Mike D’Antoni, which means they’ll probably put up about 200 points.

• If you missed Monta Ellis’ game-winner against the Nets last night, here’s video.

• The Rockets players were just as surprised as the rest of us that Mt. Mutombo was on the State of the Union address.

• Anyone in Cleveland going to the LeBron Roast this weekend? They’ve got a bunch of celebrities involved, including Cedric the Entertainer and Mo’Nique. Also, Damon Jones will be there.

• Randy Wittman is coming into Cleveland with a lot of tough talk. Can’t wait to see how the Ricky Davis/Wittman relationship works out.

• Shaq returned last night but felt “rusty.” He played rustier. And it’s a good think Shaq is back because now Alonzo Mourning would like a few days off.

• The Wizards got Darius Songaila back at practice yesterday and are hoping to get him back in game action after the All-Star break.

• Good stuff about the Celtics, who may or may not be trying to lose games right now.

• Anyone noticed the back-to-back DNP-CDs for Chris Duhon?