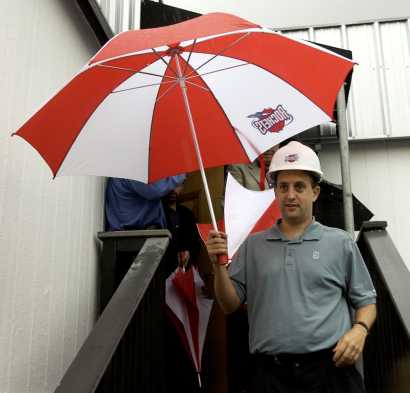 Was sitting here this morning in the relative early morning quiet of the SLAM Dome and a fire alarm went off. It only rang once, but then a series of strobe lights started blinking away. Someone down the hallway asked aloud, “Does this mean we need to get up out of here?” Then a construction worker came hustling down the hall with a walkie talkie, saying, “What happened!” Always something fun going on around here.

I’m still a little shaken from “24” last night. I won’t spoil anything here, but I was convinced it was going to be one of those set-up episodes where not a lot happens but it gets a blockbuster episode ready. And then the last 10 minutes happened. Amazing.

Hey, wait a minute! Melo and Iverson played together last night! This is a basketball site, isn’t it? Why aren’t we all over this story?

OK, I just mentioned it. Look, this is a marathon, not a sprint. And last night Denver played the worst team in their conference. Let’s give Melo and AI some time to play together before we all rush to judgement.

For some reason ESPN is treating Melo/AI like it’s the Superbowl. But for my money, the biggest NBA story right now is Pau Gasol wanting out of Memphis. This guy is a seven-foot power forward who can shoot, rebound and is one of the best post players in the world. And suddenly he’s up for grabs. I can think of about 29 NBA teams who could use him, too.

More on Kung Pau later. For now, you get Links…

QUOTES OF THE DAY
“It is like asking a doctor to be a lawyer.” — Vassillis Spanoulis, on Jeff Van Gundy asking him to focus on being a jump shooter instead of a driving guard.

THE LINKS…
• Love this story out of Houston, as much for the content as for the way it’s written. Rockets rookie Vassillis Spanoulis is upset that he’s not playing, so he vented to the local paper. The local paper then went to Rockets coach Jeff Van Gundy, who vents right back. So often these days beef gets squashed before we get to hear all the details. Lots of funny stuff in this story, though.

• Are the Bulls the leaders in the Gasol trade derby?

• The Magic are going to look into trading Fran Vasquez, the Spanish forward they drafted in the 2005 lottery and then couldn’t get to come to America. They figure they should move him because his deal in Spain runs for two more years. So why would another NBA team trade for him?

• Jerry Sloan not only instituted a midnight curfew for the Jazz, but he also apparently has them flying on the JR Rider Cropduster (see the note at the end of the link about their plane). Wonder if they’d move AK47 for Kung Pau Gasol?

• This is amazing: Tim Duncan has never lost a game to the Boston Celtics. Ever.

• Anyone notice that Nate Robinson doesn’t have a dunk all season? To be fair, it’s hard to dunk while you’re hanging around beyond the three-point line.

• Behind the scenes of Melo’s return last night. And George Karl has a good point, doesn’t he?

• Kwame Brown has apparently gone out to eat with Cake Man in Los Angeles and settled their dispute. Phil Jackson says he’s not sure if that’s factual because it came from Kwame.