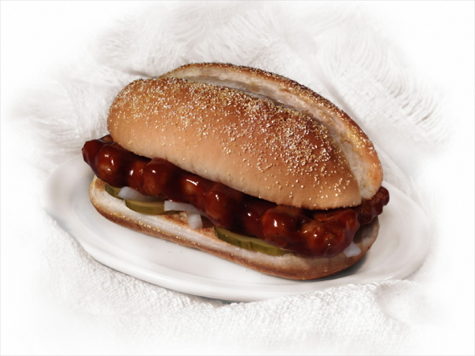 Grinding! Flew back from L.A. to NYC last night and I’m in the SLAM Dome today. That’s about 5,000 miles in less than 48 hours.

Before I rolled out of L.A., I went to Lakers practice yesterday morning. The media got to watch the last few minutes of a scrimmage, which meant I was allowed to see an epic battle between Shammond Williams and Sasha Vujacic. Phil Jackson was sitting around in a Lakers guayabera, khaki slacks and leather flip flops, and when he addressed the team I heard him say something about “this is not punishment, this is about making us a better basketball team.” Don’t know if he was talking about the tough practice or what. He also talked about Kwame moving back into the starting lineup.

The highlight of my flight back to NYC? Giants vs. Jaguars game on ESPN. But Sam doesn’t need to hear more about that from me.

Worst news of the day? While surfing all the NBA sites I saw several McDonald’s ads about how this is the “farewell tour” for the McRib, one of the greatest sandwiches in the history of fast food. I guess for Thanksgiving, I’ll be thankful that I was able to enjoy the McRib for as long as I have. I still recall in college when we heard it was going to be instituted as a sandwich of the month, and me and my friend Rich tried to organize a campaign to get people to eat as many as possible over that month to cause a spike in the McRib sales numbers so they’d have to keep it on the menu. Didn’t work, though.

QUOTES OF THE DAY…
“When you’re hit by a car you’re going to have injuries that linger on.” — Stephen Jackson, on his sore wrist.

“I really think that this is something that does not need to be a controversial topic if people understand what it’s about before they just panic and throw their hands in the air when the word ‘nuclear’ is first used.” — Larry Miller, Jazz owner, on the Jazz naming their arena after a nuclear waste disposal company.

“From now on when people think about the Utah Jazz they will be thinking about nuclear waste. EnergySolutions isn’t something I really want to correlate with Jazz basketball.” — Olivia Egbert, a Salt Lake resident.

“Look, I’m not trying to be an ass, I promise you. But I don’t care nothing about that. I don’t care who you’re playing against, if you’re playing a little rec-league team. The effort is supposed to be there every night. So it’s not a big thing for me. To say, ‘Yeah, we gave effort’ or whatever, you’re supposed to give effort. But when you go out and play basketball, you’re supposed to win the basketball game.” — Allen Iverson.

“I’m doing what I normally do and not getting the benefit of the doubt, so I have to adjust. It’s not a situation that I’m fouling for the hell of it. They’re just calling it. That’s why I exist because I play the way I play – so it wouldn’t be in my interest to stop playing that way.” — Raja Bell, on fouling out of three of his last six games.

“I was just digging in the tool shed tonight just trying to come up with the right tool to hang around.” — Isiah Thomas, on benching Steve Francis and Stephon Marbury for most of the second half.

THE LINKS…
• The NBA has taken away a technical foul they gave to the Pistons bench and instead charged it to…Rasheed! I’m sure he’s thrilled about that. Some of the people they talk to in the story don’t sound so happy. Also, it says here that the Jazz are wearing those weird blue uniforms because the NBA won’t let them wear black anymore.

• With Delta Airlines bankrupt, the Jazz have found a new arena sponsor, a company called Energy Solutions that happens to dispose of nuclear waste.

• Now that Dajuan Wagner is back on the chilling list, the Warriors might go after Luke Jackson.

• Can we send Bob Hill and Earl Watson to couples therapy? These two just don’t stop…

• Some of the Spurs players went to an Ultimate Fighting Championship bout.

• I think Isiah Thomas called Jamal Crawford and Nate Robinson tools, but I’m not sure.

• Pat Riley says there’s no way Mike Fratello is replacing him in Miami.

• Headline of the week: Stop Hating, Van Gundy says. Next thing you know he’ll ask us all to stop snitching, too.

• The Pacers can’t run their fast break offense because their opponents are scoring too often for them to fast break against. Stephen Jackson is going to have his minutes reduced.

• Kirk Snyder is out for up to four months. Could this mean the return of Bonzi Wells?

• Larry Hughes may be gone ’til December.

• Jarvis Hayes’ injury isn’t as bad as was originally thought. Dude’s had some bad luck.

• Marvin Williams had his cast removed and should be ready to play in a few weeks.

• Finally, our thoughts go out to Grant Hill, who will miss the Magic’s next game after his grandmother passed away.