The Links: Melo, LeBron and D-Wade 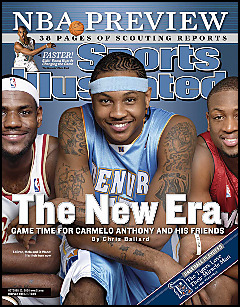 QUOTES OF THE DAY
“I don’t think he is, but it sure sounds good.” — Mike Brown, on whether new Cavs forward Dwyane Jones is really 6-11.

“It was one of the few positive [talks] we’ve ever had.” — Brendan Haywood, on his offseason meeting with Eddie Jordan.

“I’ve got a tough situation. I grew up in Cleveland, so I’m a Cleveland Indians fan. I lived in Minnesota a long time, so I’m a Minnesota Twin. But I’m also a Tiger. So I can go any way.” — Flip Saunders, covering his bases.

THE LINKS…
• Sports Illustrated is trying to jinx the NBA’s best players, and the Suns, too.

• If this guy makes the Nuggets, he might have the best-selling jersey in NBA history.

• Welcome to the Knicks, Jared Jeffries. And look who’s stepping up! Mutoni, you should be all over this.

• The Connecticut Lefty meets the chilling list. Does this mean Jay Williams makes the team? Not that this matters really, but the Nets are 0-3 and have given up 100 points in every preseason game.

• The Celtics can’t stop raving about Rajon Rondo, who scored 12 fourth quarter points against the Knicks. Unless this is a different Rajon Rondo than I saw play a lot the last few years for Kentucky, a word of advice for his opponents: Let him shoot jumpers!! Rondo makes Ben Wallace look like Jimmy Chitwood. (Also, the Knicks PA announcer called Luke Jackson “Luke Wilson.”)

• Our friends at K1X sent this along. Is he dunking on a 9-foot goal?

• The new, gangsta Rob Swift has people raving in Seattle.

• Can you believe they’re having injury problems in Indy? Who’s their trainer, Dr. Seuss?

• SLAM Rookie Diarist Kyle Lowry, and a feature on his spin move. And Junior Harrington received a “nasal laceration” against the Bulls.

• If anything, we need more Turkish teenagers in the NBA. And 7-foot “Greek fellas.”

• Sekou Smith has had it with travel. I’d hate to be sitting next to him on a flight, anyway.