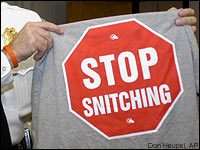 Anyone stay up for that Warriors/Kings game last night? The Warriors are really fun to watch — like a more out-of-control version of the Phoenix Suns. Baron was on fire, Monta Ellis couldn’t do anything wrong, Andris Biendrins looked like an All-Star, and Don Nelson was wearing what appeared to be a terrycloth shirt under his sportcoat. The problem with Golden State is that they can’t defend anyone, so even as bad as the Kings were playing, they were still in the game up until there was about 2 minutes left.

Haven’t posted much today because I’ve been working on the SLAM Newsletter, which will go out later this afternoon.

CHARLES BARKLEY QUOTES OF THE DAY…
“Chris Webber must be rolling over in his grave watching Sacramento play. It’s a shame they broke that team up. He made them a perennial contender and he never got the credit he deserved in Sacramento and that’s unfortunate.”

“I always say men and women can only be friends if the woman is ugly.”

THE LINKS…
• The Philly papers say CWebb has asked for a trade, although in the article that started all of this, Webber never does say the T word. But I’m sure a lot of teams want a guy who can’t jump and is making $42 million over the next two years.

• Ron Artest apparently told Ben Wallace to suck something that I won’t write here, which led to the Brawl in Detroit. You can read what he said here.

• Interesting chess move by Billy Hunter and the Player’s Association. They’ve signed a deal with a supplement company to provide pills and powders and all that stuff to each team. The Players did not run this by the League office, probably because the NBA did not go to them for input when they signed their deal for the new balls or the new tougher technical foul rules. The League says, “It has been the NBA policy that our players should not take supplements,” which basically means the Player’s Association did this as a big screw you to the NBA. This could get fun, fast. If they really want to get the League angry they should sign a deal with Hustler to make them the official magazine of the NBA Players.

• The Lakers and Raptors meet tonight, and the Raptors say there’s no way Kobe gets 81 on them again. Unless Sam Mitchell is coaching.

• THE CHILLING LIST: Ben Wallace “heard a pop” inside his bicep last night, but played through the pain….. Larry Hughes is out at least a week ….. And Big Smooth is out at least one month ….. Speedy Claxton is returning in a limited role ….. Raja Bell is back from sore ribs …..

• Perk says the best way to guard Zach Randolph is to get in his head and let him take himself out of the game.

• Bob Hill and his glorious hair met with Earl Watson and had what sounds like a one-sided conversation.

• Nenad Krstic is officially being called the Serbian Sensation.

• Peter Vecsey says the best deal the Knicks made last year was one that never happened.