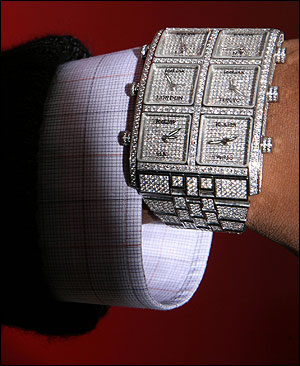 Got a new mouse today for my computer, and it feels like I got an entirely new computer. My old mouse was like a bad relationship that I was stuck in, and I really didn’t know how much I was missing by using the old mouse. And why don’t they market mouses? I don’t think I’ve ever seen a TV commercial or ad on a webpage for a mouse.

Sorry. A little off-topic there. Leah from XXL Magazine, who sits in the office behind me here, is blasting disco music this morning, and I feel like I’m at Studio 54 or something. Also, it’s like 20 degrees outside but about 2,000 degrees inside the office.

Someone mentioned in the comments of yesterday The Links that Bill Simmons wrote a long story about the glory of the Suns yesterday. (I’m boycotting ESPN.com for the most part because my man John Hollinger is hating — he has the Hawks ranked 30th in his “power” rankings. He knows they’ve won three straight games, right? And somehow he has the Celts 21st.)

I read Simmons’ story and enjoyed it, but as I commented yesterday, I still don’t think they’re the best team in the NBA, and I still feel good about picking the Mavs to win it all. The Suns are the ultimate regular season team, but Dirk is becoming the ultimate post-season (halfcourt) player. They took up Dirk’s MVP cause in Dallas today.

Lots of hoops last night. Let’s get to it…

QUOTES OF THE DAY
“I know I’m not necessarily qualified to tell somebody else who should be an All-Star, since I’ve never played with one since I’ve been in the league. But I’ve played against plenty of guys who were All-Stars, or supposed All-Stars, and none of them have been as good as Joe is right now.” — Josh Smith, on Joe Johnson. Gotta love the humility.

“The thing I’m mad about most is my house. I bought my house and furniture and made it comfortable. Now I have to leave.” — Al Harrington, on being traded to Golden State.

THE LINKS…
• Any story that begins with a guy making smoothies at Sebastian Telfair’s apartment is a must-read. And there’s this photo of his completely obscene six-time-zone, 28-karat watch. He makes Diddy look like a minimalist.

• Ron Mexico is keeping it real. I didn’t even know products like this existed. (He totally should have used these.) I particularly like that he was flying on a commercial AirTran flight, since he’s one of their main spokesmen.

• Stephon Marbury has publicly jumped on board the Eddy Curry For All-Star campaign.

• A lot of people, including a lot of you guys out there, have publicly wondered what in the world the Pacers were doing with that trade yesterday. In Charlotte they’re saying Troy Murphy has bad hands and slow feet, which I don’t understand because he’s averaging nearly a double-double for his career. Al Harrington says he wanted to go to Golden State all along, then adds that he never liked Rick Carlisle’s offense anyway. And Mike Dunleavy is just upset he didn’t get to trade for his son.

• Check out this picture of Shaq and Ron Rothstein. I really hope there’s some sort of perspective trick going on there. Shaq is big, sure, but come on. (Also, Shaq is not returning this week.)

• Remember the story yesterday about teams refusing to double-team Gilbert Arenas at the end of games? Well, the Knicks did double Gilbert last night, and the Wiz ended up getting a wide-open dunk for Caron Butler to win the game. I agree with doubling Gilbert, but I don’t agree with doubling him way out at halfcourt with that much time left. Whatever…it’s the Knicks.

(And I won’t accuse Dan Steinberg of burying the funny quote at the end of the video here — but I will give him a hard time for making us sit through a Honda ad to get to it.)

• So much for Charlie Ward’s doctor who said T-Mac would never have back problems again: T-Mac missed last night’s game with…a sore back.

• Now this is really interesting: Philly got two first-round picks from Denver in exchange for Iverson. One of those picks is from Dallas is protected against being a top seven pick, which is pretty much impossible. But the Nuggets’ own pick is also protected against being hte number one pick. So if the Nuggets miss the playoffs and get the first pick in the Draft, Philly doesn’t get it. So basically they gave up Iverson for two picks that are both protected against being the top pick. Really nice work by Billy King. Next thing we’ll probably discover that the Sixers have decided to throw in Andre Iguodala as well.

• I know the Pistons are excited to add Chris Webber, but does C-Webb really give the Pistons the best starting five in the NBA?

• Another candidate for horrible injury of the year comes from the Bulls, where Nocioni had to come out of the game last night after slicing open his tongue.

• The Orlando Sentinel presents Magic Dancers Through The Years, which is basically an excuse to run a bunch of pictures of hot chicks on their website.

• Byron Scott on why the Saints should beat the Bears.

• Finally, Eddie Griffin is driving out of Minnesota. Let’s hope he keeps both hands on the wheel.