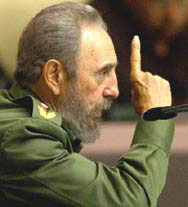 QUOTES OF THE DAY
“It was nice to get back on the floor after getting back from France and sweat out all that cheese.” — Brent Barry.

“No, no, hell no. Don’t even go there. Whatever context it is, you’re not. You’re $10 million a year short.” — Isiah Thomas, after a reporter asked Stephon Marbury if he was the Alex Rodriguez of the Knicks.

“It was the worst thing I’ve ever experienced as a basketball player in my career.” — Steve Francis, on playing for Larry Brown.

“Anybody who thinks that bear is dead better bring a long broom to poke him with because he’s not dead yet. That’s what my grandfather taught me a long time ago. You don’t go around kicking a bear or a dog unless you’re sure he’s dead.” — Dwane Casey, on KG.

“The fact that you can’t really speak to the ref and the refs don’t want to hear it, that’s almost like communism. That’s like Castro, you know what I’m saying?” — KG, on the new rules.

THE LINKS…
• Stephen Jackson was charged with a felony and could be facing jail time. And if you missed our recap of the police report, go here.

• While that was going on, Jermaine O’Neal was in court up in Detroit, telling jurors he was ashamed about the Brawl. The guy that JO decked says he’s been suffering from headaches and dizziness. I just hope they ask him why he’d run out on the court.

• Welcome to Houston, Bonzi! How about a root canal?

• The Knicks are implementing a run-n-gun offense this season, which is nice and all, but the really interesting thing is the bit about how Larry Brown heard the Knicks players talk about wanting to play faster to he intentionally slowed things down.

• Good news: Grant Hill says he feels so good that he can’t tell a difference between his left ankle and his right ankle.

• Big ups to Michael Lee for shouting us out on the Washington Post’s blog today.

Before Tuesday’s game, Stoudemire was introduced as No. 32. Not liking that, Stoudemire approached the public-address announcer and told him he was No. 1. Befuddled, the man agreed, apparently thinking he was being a braggart. To get across his point, Stoudemire peeled up his purple pullover to display his new number.

• Some of the Cavs say they took some time off this summer because they were afraid after what happened to Willie Green.

• Doc Rivers trotted out a lineup last night that featured Gerald Green at center. And which Michael Olowokandi was that last night?

• Could this be Robert Horry’s final season?

• Finally, our best to the Paul family, as Chris Paul’s very cool father, Charles, recovers from a fall back home. Get well soon, Mr. Paul.