The Links: Weird pictures, and Shaq and D-Wade masks 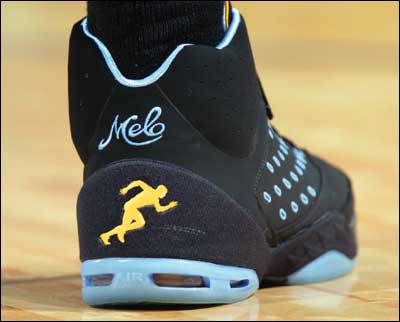 Hey. It’s here, you know? The season starts tonight, and I’m pumped and ready. There’s a ton of stuff on the internets today, so let’s get right to it…

QUOTES OF THE DAY
“It was a 24-hour thing. It literally came in and went out.” — Michael Finley, on having a stomach virus.

“I was never a big Halloween guy. I never really understood it. I didn’t go trick-or-treating as a kid. I still don’t know what it’s about.” — Keyon Dooling, mystified by Halloween.

“I feel physically I could average a triple-double.” — Jason Kidd.

“Beyoncé. Just to see what she is like. Just to see if it’s all real.” — Andre Miller, on which celebrity he’d like to have dinner with.

“That’s the last time I do that” — Sam Mitchell, after hurting his back while demonstrating defensive positioning to Andrea Bargnani.

THE LINKS…
• Is it just me, or is Chris Wilcox standing on Bob Hill’s foot in this picture? As long as you don’t touch the hair, I guess.

• It’s almost as odd as this picture of the Suns — why are they all holding their hands like that?

• For tonight’s season opener in Miami, the Palm Beach Post is providing three life-sized masks for fans to print out: Shaq, D-Wade and Riles. Scary.

• Kirk Hinrich has agreed to a $50 million deal with the Bulls, which will keep him off the free agent market next summer. Hinrich also talks about how he doesn’t spend a lot of money, and then there’s a note about him owning a Maserati and a Hummer. Nice.

• Carmelo says he has Barry Manilow in his iPod. Also, the Nuggets are going to run more than ever this season, so much so that Melo’s had a runner emblazoned on the back of his Jordans.

• Stephen A. Smith reappears to write about basketball, and he’s all over the place in this column on Billy King.

• And who’s the only NBA writer to pick the Sonics to make the postseason? Stephen A.!

• Good story on Chauncey Billups, who is being asked to step up and lead the Pistons this season.

• Jason Kidd is putting it out there. A triple-dip for the season?

• The Post says the Knicks are losers by buying out Jalen Rose, although they don’t mention that they’re saving $16 million in luxury tax money by buying him out. Surely that counts for something, right?

• Andrew Bogut is back in time for the regular season.

• Terence Moore says the Hawks still need two more players, and I’m guessing he’d recommend they get two guys who used to play at Notre Dame or were members of the Big Red Machine.

• Michael Olowokandi went into the preseason without a team, and now he’s got a spot with the Celtics.

• James White is out in Indiana. Hopefully someone else signs him before the dunk contest.