…the more they stay the same 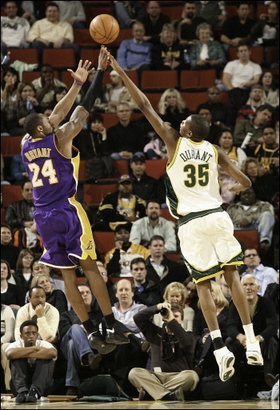 Very interesting change to the tone of the season last night. News came down that Andrew Bynum will be out of action for at least 8 weeks, right as the Lakers were playing their best team ball in years, riding high on a six game winning streak. The natural reaction was for people to wonder how Kobe would respond, how he would adjust his game.

The answer was he scored an NBA season high 48 points and hit the game winner in OT to push the win streak to seven, a vintage Kobe performance putting his team on his back and carrying them when he felt they needed him to.

He also took 44 shots in 42 minutes plus seven free throws, only had two assists, was credited with a -3 in the plus/minus category, and the hard fought OT win was over lowly Seattle, who dropped their seventh straight with the loss.

As always, there will be strong opinions on both sides of the fence. It’s been a very different season around the league, while there have been the individual breakout stars as always, guys carrying teams, there has been a noticeable shift back to a more team-oriented style that’s been brewing for a few years. With their win last night, the Lakers moved into…

THE NUMBER ONE SEED IN THE WEST.

Of course they are tied with Phoenix record-wise, and there’s just a half game separating them and Dallas and San Antonio. But it’s the symbolism of being #1 right now. How long will it last? Do they have to exert more energy than they hoped to? Last night was one game against a bad team. It’s almost comical how tough their schedule gets, beginning with their next game on Thursday. Phoenix, Denver, at San Antonio, at Dallas. Was this the high point of the Laker season before they come crashing back down to earth? Or do they step up to a humongous challenge and become a better team for it? Story developing.

In other big news, the Celtics lost last night, making it two in a row for the first time this season, both losses to Washington. Welcome back to earth. One long-term implication of that loss is we won’t have to listen to the “can they beat the Bulls 72 win record” stuff much longer. The other is this… do the Wizards have the Celtics number like the Warriors had the Mavs number? You might recall on opening night Gilbert talked a lot of trash about how he would deprive Boston fans of a win as they debuted the big 3 in Boston. That was an L for the Wizards, and these two wins obviously came without Gilbert. Washington is playing too well to be the 7th or 8th seed to meet Boston in round one, but perhaps a second round matchup…