The NBA does not stop for Christmas 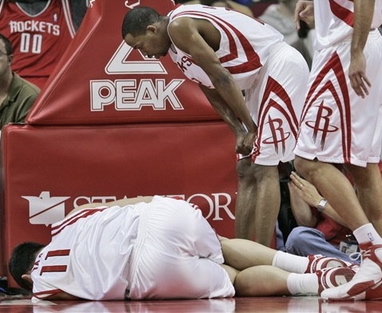 Christmas break. A time of relaxation, seeing family, cursing out your worthless football team, being forced to endure a non-rivalry holiday tradition, and so much more.

The Lakers-Heat game – a traditon based on one trade and absolutely nothing else. It was missing some key pieces in Shaq and L Odom, and was supposed to be a Kobe vs. Wade show. Wade delivered bigtime with the fantasy line of the year: 40-11-4-4-4. There was also some talk of Phil and Shaq starting a verbal feud. Ok, which one of them is writing a book this time? I’m done with all the Phil-Kobe-Shaq drama. Three champions, three huge egos. Just work it out guys. Breathe Phil, breathe. What would your Roshi say?

As for Shaq, you’re calling him Benedict Arnold? That’s what N.W.A. said about Ice Cube. You know how that ended. No Vaseline.

Speaking of Ice Cube, on one of my many extended holiday drives, I listened to all of Amerikkka’s Most and Death Certificate. Now that is MUSIC. I’m honored that he wrote a song called “I wanna kill Sam” even though it has nothing to do with me.

Here are some other slightly important events that had to take place over the break.

Yao – out for six to eight weeks. That really sucks. He is the best center in the league right now, and a serious MVP candidate. The Rockets are in so much trouble without him, T-Mac is actually going to play a game of basketball.

Rashard out. Ray back in. Good move, Sonics. Do something to keep the fans coming (I suppose) but don’t mess with those lottery balls.

Allen Iverson made his Denver debut. He came off the bench and played pretty well, they lost to Sacramento. I loved how Allen talked about his routine during the time he was in limbo. No running, no playing games. Just shooting around in his driveway.

Marcus Camby is hurt again. That’s not really news though. It’s just a part of life. I was amazed he didn’t get hurt during the brawl when Jared Jeffries stomped past him.

Gilbert Arenas had 54 points against the Suns. He did it wearing the Wizards bootleg duracell uniforms, the same one he wore when he scored 60 against the Lakers. I hope he’s not superstitous and forces the team to wear those every night, cause they hurt the ol’ eyeballs. Then again, I’m pretty sure Gilbert is the most superstitous person in the league. The Wizards will have to wear those monstrosities often. Steve Nash had 42 and 12 in that game. The final score was 144-139 in OT. Please let there be a Wizards-Suns Finals. That’s actually not such a crazy possibility. Sternbot, set it up. You know what to do.

Gilbert is now allegedly saying “Quality Shot” instead of Hibachi before he takes one of those bombs that Kobe “team-first” Bryant disapproves of. Gilbert Arenas is an amazing person. I do believe that No. 24 is feeling resentment because the public does not seem to have a problem with Gil the chucker, whereas everytime Kob drills a fadeaway over the double team, it is an indictment of his narcissitic psychosis. This difference between the way the public views Gilbert and Kobe is this: Kob was a lottery pick that would have gone higher if high school kids weren’t considered a risk back then. He also does not come across as original or genuine in anything that he does. It took a rape trial to humanize him and show the world that he is not perfect. Gilbert was a second round pick, and is a true original. Kobe’s persona is ruthless. Gil is harmless fun. I love that Kobe is crazy enough to think he can criticize another player for doing what he is most criticized for. Maybe he was joking. Maybe we need to study his brain, then figure out how to replicate it and use it as a weapon.

Nenad Krstic, out for the year. Let’s take a look at the amazing Atlantic. Iverson is gone. Bosh has been hurt most of the year. Pierce is injured. Nenad is done, and Richard Jefferson hasn’t been himself for a while. Steve Francis has been hurt, and when he came back from an injury it actually killed the Knicks post-brawl momentum. The worst division in the history of sports is losing it’s best players and actually getting even worse. Incredible. Other than Vince Carter, who is now the best non-inured player in the division by a mile, guess who the leading scorer in the Atlantic by ppg is?

Eddy Curry at 17.8. Next on the list is his teammate Jamal Crawford. The Atlantic is sooooooo bad.
So, here’s a look at a possible starting 5 of players that are no longer in the divsion or haven’t been or won’t be playing due to injury:

By the way, for those of you who just started watching basketball in the past year or so, Steve Francis of the NY Knicks was once widely considered a superstar. He was an “impact player” and everything.

As Mutoni reported, Kevin Garnett has finally decided that he’s going to shoot all he wants and to hell with everybody else. This is the best passive aggressive trade demand yet. Even better than Iverson saying he didn’t ask for a trade, he merely suggested that maybe it would be best if he were traded, though he’s not asking for it.

And finally, Mo Williams was named Eastern Conference Player of the Week. I guarantee there are a lot of you out there that don’t know who I’m talking about or what team he’s on. He plays for the suddenly red hot Bucks. Four wins in a row.

Did I miss any of the big events of the Christmas break? I think that’s a fairly decent wrap-up.