The once and future KING 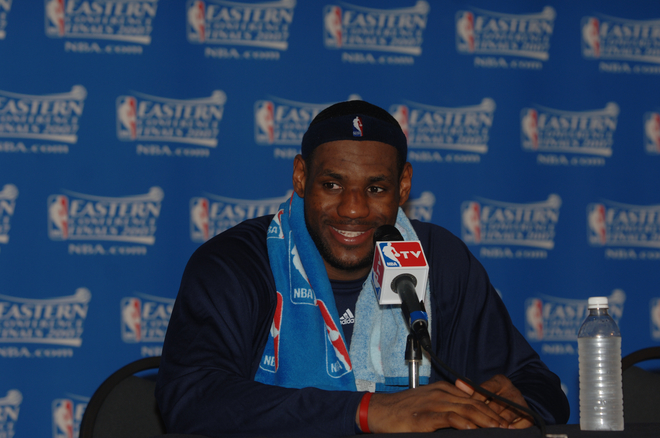 He has arrived. We all saw what happened, witnessed if you will. But this was much deeper than a marketing campaign slogan. His team stayed close in a game against a better team on the road, with Bron resting on the bench at the beginning of the fourth.

He refused to allow them to lose in the fourth quarter. No more of that passing on the responsibility to his overmatched teammates. LeBron took matters into his own hands, and kept making play after one-of-a-kind play. Vicious dunks, tipped balls and steals when he had the energy for defense, confident jumpers, some free throws… He had the game won at the end of the fourth. The Pistons kept responding and we went to OT. Vincent is writing the game notes, so I don’t want to get into play by play-ish specifics.

In the first OT, he took his game to another level, a higher place, the zone, all of the clichés that are 100% true. His borderline NBA caliber teammates started fouling out. It didn’t matter cause none of them deserved the ball anyways. LeBron started hitting crazier and more improbable shots. Detroit stayed in the game because they are the better team. When it looked like Cleveland had a comfortable lead, Detroit made their move, and thanks in part to Mike Brown’s brilliant overusage of timeouts, there was a second overtime.

In that second OT, he took his game to a level beyond what he had in the first OT. That is not physically possible, yet it happened. Chris Webber, once criticized for many of the same reasons that LeBron has been of late, delivered maybe the most clutch basket of his career, drawing a foul on Big Z for the three point play. LeBron responded with a three of his own like it was nothing. He was getting banged around by Pistons defenders, causing him to stay down on the floor in pain for a brief moment. He had the likes of Damon Jones assigned the task of playing key moments next to him. Finally, LeBron cruised down the lane for the game winning layup.

This was not a mere sporting event, and I refuse to look at it simply in basketball terms. The NBA is desperate for moments that transcend sports and entertainment, where even the most casual or uninterested fan will recognize greatness and a legendary performer. For the simple basketball view, yeah Flip blew this one by not double teaming, Rasheed was rattled and on the verge of going Sheed on us, Tayshaun and Chauncey couldn’t score one on one against Eric Snow, and the Pistons in general let LeBron blow right by them all the way to the basket without a challenge of any kind whenever he felt like it. But that’s all just basketball.

If LeBron was saving his energy all season long for one night like this, it was worth it. I’ve got no qualms with the MJ comparisons, in particular to the 63 point game against the Celtics, which was in a loss by the way – not a game that could launch him towards his first Finals – but I say this is LeBron’s day to be celebrated for being himself. No comparisons to people who will always be compared to until the end of time. I would go as far as to say that played like Achilles in the Trojan War, if I were to take it there. Uh, minus the death of course. He watched the battle from the sidelines, then decided to jump in and dominate.

Those last second losses in games one and two? Forget about them from a sports-media standpoint. This is all part of a real life myth. They were part of the larger storyline. First LeBron made “the smart play”, and he learned that wasn’t good enough. Then, he tried to do it on his own and it still wasn’t good enough. He broke through in game 3, kept the momentum coming in game 4 when Daniel Gibson came to his aid – and no disrespect to Gibson, but when he is playing like the second best player on a team in the Conference Finals, then that team is a one man show – and then there was last night on the road.

This feels like the ascension. The series is not over, and there is still the matter of the NBA Finals to be played, but we have now seen the real LeBron on the big (cable TV late on a weeknight) stage. Forget about all of the marketing, the money, the people that have made lives and careers off of the business of LeBron. This was strictly for the fans, his legacy, and history.

Today should be a fun, hater-free Friday. Unless you want to hate on Flip. I’m not even mentioning LeBron’s numbers, because this performance was so much bigger than them. No matter what happens in the future, even if this is the one night peak of LeBron’s career at age 22 – and honestly this was a performance that will be hard to top for anyone doing anything in life – we will always have last night. This year’s playoffs have been unusually boring, but last night they were saved.