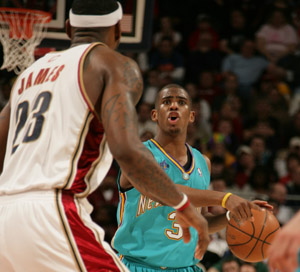 A quick reminder before I get into this. Some of you may recall that in the preseason I attended a TNT luncheon here in NY where I shook hands and made a bet with Charles Barkley. The bet was simple. He thought the Cavs were a fluke team last year and that they weren’t a playoff team. I of course thought that was a crazy statement and that of course they were gonna make the playoffs. We decided that the loser would buy the other person dinner. I’m not implying that Chuck is trying to avoid paying up or anything, he like myself probably forgot about it. That being said I’m still waiting….

Speaking of Lebron…. Whether it’s tonight or in a game 7 I still expect the Cavs to win their series with the Wizards. Additionally, the back and forth rhetoric between both teams has become a little tiring. And I can’t believe Darius Songaila got suspended for game 6, I mean really the NBA needs to stop coddling its stars so much. Or at least so obviously. The NFL at least tries to pretend that its stars don’t get preferential treatment. However, I have no problem with anything that Deshawn Stevenson said. Everybody’s acting like he has to bow down to Lebron instead of applauding his tenacity. What do you want him to do? Ask for an autograph? How can a guy really battle someone if he’s in awe of him? If he’s just slurping him and afraid to talk smack to him and just generally out of the game mentally? And to the Cleveland fans who approached him in an Ohio mall, you people are f*ckin weirdo’s. If anything I respect Deshawn for not only saying it but for not shying away from the controversy. I respect it. For those of you that don’t, well, you guys are sorta sad.

Thank you Sixers for bringing energy back to the fanbase. I can’t speak for everyone but I assumed that we were in store for a period of irrelevance. Now we can actually look forward to the off-season and go into the draft with our heads held high. The team needs a lot though. We are far away but closer than we were this time last year. I know a lot of people are hoping we get either Elton Brand or Gilbert Arenas but I admit to being nervous about both of their injuries. As the draft approached I’ll have a more concrete viewpoint, because as of now, I’m not sure what we should do. Trade Iguodala? Sign a free agent or hope that we get lucky in what promises to be a deep draft. We’ll see.

Those of you still doubting Chris Paul please raise your hands, that way I can clown you in a more direct way. The same goes for those of you who still support Dirk Nowitzki, Mark Cuban and/or the Suns upper management. I’m not a licensed psychic but I saw this coming a mile away. The only thing more obvious than the Mavs and Suns losing was Miley Cyrus joining the young and naked starlet club.

Jazz will give the Lakers a fair one but ultimately they have nobody that can guard Kobe. That upcoming Spurs/Lakers WC Finals is gonna be truly great.

Btw, the Carmelo Anthony bandwagon is officially empty. His rep fell apart faster than Bear Sterns. Ask around, somehow he’s become the new Tmac and it won’t change until he makes it’s a priority that he’ll diversify his game. I don’t see how they can keep the Nuggets together, especially if they’re gonna keep George Karl. Did you see the latest? Where he’s talking about being tougher on his players? Really George? Sorta after fact now right? Trade JR Smith and Kenyon and keep it moving. Do it now before things really fall apart.

Speaking of Roots album titles the new joint is banging. Two days in now and I can honestly speak on Rising Down. It’s not better than Half-life but it’s just as hot as Phrenology and any of their other great albums. The songs I Will Not Apologize and Singing Man are on constant in my life right now.