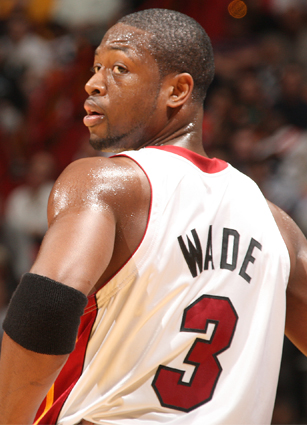 Lots of games last night, but not too many huge match ups.

Suns/Heat was probably the game that I was most intrigued to watch, but it ended up being the Houston/Utah game that entertained me the most. Close game and Deron Williams has been phenomenal lately. I don’t know how I feel about the move to keep Millsap on the bench, just because Boozer is back. I suppose, it’s working for them because they are still racking up the wins, but I just love watching Millsap do his thing.

They are in town on Sunday and I’m looking forward to seeing Deron live for the first time. I loved seeing him smile as he backpedaled up court after rising and draining an 18-footer (his second in a row), for his 25th and 26th points of the night in the Jazz’s victory against the Rockets.

I was freaking jacked to see Beasley score 28 last night. It almost overshadowed Dwyane’s line of 35 and 16. That’s pretty ridiculous. Great way to celebrate his SLAM cover dropping. Loved seeing Daequan and his 27 points as well. I don’t know what I think about this Heat team, but I certainly love watching Dwyane killing it.

Also, I’m ignoring the Shaq comments about Stan for right now. I may tackle them later on my Court Surfing blog, but I can’t begin to get into it now or I’ll be writing when the sun comes up.

Did you all hear the booing of Steph in Jersey? HARSH. I know, I know, they’ve got plenty of reasons to boo, but my goodness. My heart hurt a little. It was thundering!

I also have no idea why I did not get the Mavs/Spurs game on League Pass last night. It didn’t appear to be on ESPN or TNT, so I don’t understand. Hear it was a pretty good game though.

The finish to the Blazers/Pacers game was perfect. Brandon Roy getting fouled with 1.7 seconds on the clock to hit free throws and then the Pacers missing a three at the buzzer. Okay, it wasn’t perfect because I actually hate fouls in the final seconds, but I just love BRoy.

My new favorite rookie Mike Taylor (leave me alone, I’m allowed to love the rooks!), had some smooth moves last night, including a dunk. He NEEDS to be in the dunk contest next year. Watch the vid! It doesn’t ever get old.

We’re going to go short for the blowouts that occurred last night. As many of you noticed and heckled me about last night, I wrote that McDyess had a 67-point night yesterday. Ooops. I wrote 17 and meant to go back to edit to 16 point night and obviously messed that up. Glad you all had fun with that. Hardy-har-har. haha.

All you need to know about the Warriors/Bulls game is that my Warriors got smoked, 110-88. Jax had 19 and 6 assists and Corey Maggette had 14 and 9 and that’s about it for the Warriors. The Bulls had 23 and 9 from John Salmons and 19 off of the bench from Brad Miller as the two former Kings were looking good in their Chi-town uni’s. Joakim Noah was a beast with 14 points and 17 rebounds and every time I flipped to this one, he was active and all over the place. Ryne’s boy, Derrick Rose, had 14 points and 6 assists in this one.

Also, Anthony Randolph and Tyrus Thomas had some crazy block/dunk sequences on each other. Thomas looked as though he was dying after he crumpled to the floor like a rag doll after Randolph ferociously blocked his shot. It really, was not a pretty scene. He got him back with a big dunk, though.

Thunder/Wizards game wasn’t a blowout, but it was a match up between two teams who have 30 wins combined. Eeek. No Caron Butler for the Wizards. Also, no Durant or Jeff Green for the Thunder. They did have Russell Westbrook and Nenad Krstic though, and they willed them to another win, this time an 88-83 victory. Oklahoma City had a balanced scoring attack as all five starters finished with double figures, led by Krstic’s 18 while Westbrook finished with 12 points and 8 assists,Thabo Sefolosha added 15 and Nick Collison finished with 12 points and 10 boards. The Wizards were led by Antawn Jamison’s 29 points and 10 rebounds while Andray Blatche and Daruis Songaila added 14 points apiece.

The Cavs dismantled the Bucks, 91-73 in Cleveland last night. The Bucks topped 20 points in the first quarter, and then fell apart after that. LeBron James finished with 23 points and 8 assists as Delonte West had 13 points and 8(!), steals, and Mo Williams added 15 points. Richard Jefferson scored 29 points for the Bucks and Ramon Sessions continued to stuff the stat sheet, finishing with 10 points 6 rebounds and 8 assists. The Bucks shot only 37% and attempted only 14 free throws (making 13), as compared to the Cavs 29 attempts (making 20).

Not sure what happened between Damon Jones and Bron when he was running by the bench after hitting a damn ridiculous three, but they didn’t look happy. Francisco Elson also had a rough night after he got dunked on.. and truly posterized by JJ Hickson. Then had to deal with some wooziness for the rest of the game.

Somehow the Clippers managed to turn a 53-52 halftime lead into a 118-95 loss against the Grizzlies last night. Rudy Gay was great for the Grizzlies, finishing with 35 points while Marc Gasol had the surprise line of the night with 20 points, 10 assists and 8 rebounds. Yes, that is correct, 10 assists. OJ Mayo had 18 points and Hakim Warrick added 17 off of the bench. The Clippers got a 25 point night from Al Thornton as Baron Davis had 16 points and 7 assists and Mike Taylor scored 15 off of the bench.

As I said, I didn’t see any of the Mavs/Spurs game (and really, did anyone else with LP have this problem?), but the Mavs responded to Mark Cuban’s warning and defeated the Spurs 107-102, despite a 37-point performance from Tony Parker. I’ve been told that Roger Mason hit a big three down the stretch to keep the Spurs close but that Dirk hit a dagger for Dallas. Tim Duncan had 19 points, 12 rebounds and 5 assists in the loss and Mason finished with 23. Dirk had 24 points and 12 rebounds, Josh Howard scored 29 points, Jason Kidd had 17 points 9 assists and 7 rebounds and Jason Terry added 17 points off of the bench.

Our boy Justin Walsh watched the Celtics/Nets game in it’s entirety and when he saw me on facebook late he once again offered to throw a recap my way. This time however, he went off. Here you go, the game in his words:

At a buck and some change remaining both franchises gave their “we are who we thought they were” moments. Vince Carter just hit one of his “Oh god don’t shoot it…Alright, good shot!” 25 footers. Boston calls a time out. Out of that time out, Ray Allen drops his “Jesus Shuttlesworth is the savior” 25 foot jumper of his own. The score is 111 all, tensions run high. New Jersey calls a time out- they look lost. Boston looks poised and composed like they came out of the womb defending drives in the lane and before fully walking decided dagger 3’s were nothing more than commonplace. So, out of the time out, everyone knows it’s gotta go to their franchise PG- Devin Harris, fastest man baseline to baseline. Kendrick Perkins just wouldn’t have it & blocked a runner in the lane. Glen Davis grabs the board & the C’s call a 20 second TO. Coach Rivers is calm, just like before. Out of this timeout, Pierce hits one of those “I seriously think I’m better than Kobe” jumpers. Bam, takes the lead. 113-111. New Jersey takes a time out. Vince looks pissed, but out of the time out he misses a layup- Big Perk with the rebound. And after that, it was fouls and stoppage galore. In that sprawl of whistles, you seemed to realize the jist of both franchises. Boston was the best team in the league. The Nets were dying on the gurney just to keep up. They are who we thought they were.

The Suns are committed to running. Dwyane Wade was committed to running and scoring and passing. And getting his team the 135-129 victory last night. With Shaq running his mouth all week, he was unable to run the Suns to a win and the dropped their second straight as Dwyane Wade helped his team pull away late, scoring and distributing with every possession, finishing with 35 points and 16 assists as the Heat held off a late push by the Suns after bursting out to a 40-29 lead after the first quarter. Wade had 19 points in that first quarter and continued to shine the rest of the way through as many of his assists set up Michael Beasley (career-high 28 points and 9 rebounds) and Daequan Cook ( career-high 27 points), off of the bench. Steve Nash was solid in his second game back from injury, finishing with 29 points and 10 assists to lead the Suns. Shaq finished with 22 points and 8 rebounds before fouling out late in the fourth.

When Deron Williams decides to drill back-to-back jumpers in your face with the game on the line and the clock winding down, you know you’re in trouble. Last night the Rockets were on his bad side as he did just that in a 101-94 victory. While Carlos Boozer was solid with 20 points and 17 rebounds, it was DWill who had 10 points in the fourth and helped to fend off the Rockets every time they got close. The Rockets trailed by 13 before storming back, but once they got close, they were unable to handle the combo of Boozer and Williams, who finished with 26 points and 14 assists.  Ronnie Brewer added 19 points for the Jazz. The Rockets had a 25 point night from Ron Artest and 19 points and 5 blocked shots from Yao Ming as Kyle Lowry added 14 off of the bench.

Brandon Roy. That’s about all you need to know for this one. With 1.7 seconds on the clock and the game tied at 105, Roy made his move to the hoop, was tripped up and got the foul call. He sank two free throws like it was nothing, and the Blazers got the W. Trailing by eight to start the fourth, the Blazers came back with a 12-0 run and led 105-101 before Marquis Daniels hit two free throws and then stole the ball to get a layup to tie the game with 11 seconds remaining. The Blazers went to Roy, who made it all happen and on the final play of the game, 1.7 on the clock, down two, the Pacers were unable to connect from three. Roy finished with 28 points as Travis Outlaw and LaMarcus Aldridge each scored 21 points. Indiana was led by 28 points from Marquis Daniels, 24 points from TJ Ford, and 13 points, and 11 rebounds from Troy Murphy.