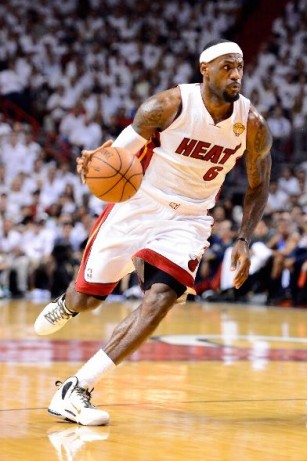 The Nets opener went more or less how you’d expect. Energy early on was incredible. The new Barclays Center was loud, and the Nets got off to a hot start offensively. However, the couldn’t stop the Raptors in the first quarter and trailed by eight going into the second quarter. They dominated from then on, though, and took an eight point lead into halftime. The Raptors flirted with a comeback a few times, but ultimately the Nets held them off.

Brook Lopez, subject of many trade rumors and criticisms about his rebounding and defense this summer, had a big game. He shot 8-of-17 from the floor and 11/15 from the line, though he only pulled in five boards. Deron Williams was solid with 19 points and 9 dimes, and Joe Johnson went for 14 in his first game with the Nets. Kyle Lowry did all he could for the Raptors, going for 28, 8 and 8, including a number of very deep threes, but it wasn’t enough.

Brooklyn is going to have defensive problems this year–that much is clear. They probably aren’t title contenders until they can clean that up, but there’s no doubt that they’ll be fun to watch this season. Unfortunately, there was one blemish on an otherwise perfect night:

Celtics (1-2) 89 at Wizards (0-2) 86
Wheeew. The Celtics let the Wizards hang in the game for way too long last night, and it nearly bit them. Boston led 83-70 with eight minutes to play, but Washington cut it to 87-86 with three minutes left. A Washington stop late in the game with Boston leading by one gave the Wizards a chance to take the lead, but a quick three-point try was off the mark. They had another prayer later, trailing by three with about a second to play, but a full court heave missed and the Celtics picked up their first win of the season.

Paul Pierce was sharp for the Cs, scoring a game-high 27 points on 22 shots. Kevin Garnett went for 15 and 6, and Rajon Rondo double-doubled with 12 points and 13 assists, and added two steals and a block. Jordan Crawford and Kevin Seraphin led the Wizards with 40 points between them, and forward Trevor Booker kicked in 11 and 9.

Following a loss at home to the Bucks, the Celtics surely wanted to make a statement last night. Despite the win, they failed to do so. They’ll need to be much better than this to be taken seriously in an Eastern Conference which is underratedly deep. So far, they’ve shown us nothing to prove that they can compete with the Heat.

Nuggets (0-3) 116 at Heat (2-1) 119
This was an absolutely wild game. It was tight all the way through, and with 14 seconds to play, Andre Iguodala knocked down a jumper to put Denver up, 116-115. But Miami answered in a big way. Ray Allen, chillin’ in the corner like he’s known to do, was fed a nice pass from LeBron, hit a three, his sixth of the night, and got fouled doing it. He drained the free throw, putting Miami up, 119-116. Danilo Gallinari’s buzzer-beater three missed, and Miami advanced to 2-1.

Last night was a perfect example of why the Heat are going to be very tough to beat this season. The Nuggets scored 116 points. Dwyane Wade and LeBron combined to go 13/29. Udonis Haslem and Norris Cole combined to play five minutes. All of this, yet they beat a really solid team. How? Well, Chris Bosh dominated with 40 points and 7 boards. Allen, the hero, chipped in 23 off the bench. LeBron was a rebound short of a triple-double. This team has so many weapons it’s truly not even fair.

For Denver, Kenneth Faried had a big game, posting 22 points and 12 boards. Iguodala finished with 22 as well, while Andre Miller knocked down 8/10 shots off the bench on his way to 17 points.

Kings (0-3) 98 at Pacers (2-1) 106
This one finished as an eight-point game, but it was much closer than that. With 49 seconds left in regulation and the Pacers leading by three, Marcus Thornton drained a game-tying three. Both teams traded misses til the buzzer sounded, sending the game into overtime. In OT, the Pacers led, 96-93 with 36 seconds to play, but, again, Thornton knotted the game up from downtown. Roy Hibbert missed a tip-in that would have won it for Indiana at the buzzer, and the game went into double-OT. From then on, it was all Pacers. In fact, Sacramento didn’t even score in the game’s final period.

The Kings remain winless, while the Pacers continue to play well despite Danny Granger’s injury. It’s not the same team, but they’re getting by. David West and Paul George combined for a monster 34 points and 35 rebounds. Hibbert also double-doubled, scoring 12 points and pulling down 12 boards to go along with six blocks. For the Kings, Thornton put in 26 points. DeMarcus Cousins dropped 21 of his own, but needed 27 shots to do it.

Hornets (2-1) 89 at Bulls (2-1) 82
With each team missing its best player (Anthony Davis for NO and Derrick Rose for CHI), this was a tight game. The Hornets led by six entering the fourth, and essentially maintained that lead the entire quarter. Drawing the start for Davis, Ryan Anderson had 12 points and 13 boards for the Hornets. Greivis Vasquez, off to such a strong start that I’m beginning to remember how to spell his name correctly, led the team in scoring with 18 points, and also kicked in six assists and four boards. Robin Lopez, who has been playing far better for the Hornets than he ever did for the Suns, went for 16 points and 7 rebounds.

For Chicago, Luol Deng scored a team-high 19 points. Nate Robinson had another good game off the bench, posting 15 points and 5 assists.

Blazers (2-1) 95 at Rockets (2-1) 85
Regardless of what team you pull for, everybody had to be fascinated to see how Damian Lillard and James Harden would do last night, each playing in their third game of the season. They’re both off to scorching hot starts, and faced off against each other last night. Before I breakdown their performances, I’ll dive into what was an incredible game. With 1:33 to play, the game was knotted up at 78. A Jeremy Lin three-point play was answered by a Wesley Matthews triple, re-tying the game at 81. Both teams blew opportunities before the end of regulation, and the game went into overtime.

In the extra period, Portland took over. Lillard and Nicolas Batum (six steals) both knocked down threes in the first 90 seconds, and the Rockets never got back in it.

Back to Lillard and Harden. After scoring 15 in the first half, Harden had a disappointing final 29 minutes, and finished with “just” 24 points on 8-of-24 shooting. He added 6 boards and 5 assists. The rookie Lillard outplayed him, scoring 20 points on just 15 shots to go along with 9 dimes and 6 boards. In doing so, he joined Oscar Robertson as the only players ever to post at least 20 points and 7 dimes in each of their first three games. LaMarcus Aldridge was also big for Portland, posting 27/11/6, while Omer Asik pulled down 15 boards for Houston. Both teams are looking like pleasant surprises early on.

Bobcats (1-1) 99 at Mavericks (2-1) 126
With Dirk Nowitzki sidelined with a knee injury, the Mavs will need different guys to step up every night. Last night, OJ Mayo was that guy. He dropped 30 points on 10-of-17 shooting including 7 threes. Darren Collison and Vince Carter both chipped in 18 points in the blowout, but it was the OJ Mayo show. For Charlotte, Byron Mullins and Brendan Haywood both had double-doubles. The real silver lining for the Bobcats was rookie Michael Kidd-Gilchrist’s game—he scored 13 points to go along with five boards and five steals.

Cavaliers (1-2) 102 at Bucks (2-0) 105
This game was an excellent Battle of the Backcourts, especially late in the fourth. Ultimately the Bucks’ Brandon Jennings and Monta Ellis outdid Cleveland’s Kyrie Irving and Dion Waiters, but it was a great game. With 1:54 on the clock, Ellis knocked down a pair of free throws to put the Bucks up, 100-95. After a Waiters miss, Jennings canned a pair off free throws, putting Milwaukee up seven. However, Irving answered with an and-one. Twenty seconds later, he hit a pair of free throws to cut the lead to two. After a Jennings miss, Irving went coast-to-coast for a layup to tie the game with just a second left. The game was destined for overtime after Irving’s incredible seven straight points, but a Jennings three at the buzzer won it for the Bucks. It was an instant classic between a pair of mediocre teams.

Irving finished with 27 points and seven assists, while Waiters totaled 13 and a steal. Anderson Varejao had a big game, going for 20 and 17. Mike Dunleavy actually led the Bucks in scoring with 29 points, and added 12 boards and six dimes in a shockingly dominant game. Ellis added 23, and Jennings posted 13 points and 13 dimes.

Jazz (1-2) 100 at Spurs (3-0) 110
This was a very strange game. San Antonio led by 18 at halftime—typically a death sentence for whoever they’re facing. However, the game was tied at 79 after three quarters. The Spurs had the edge in the fourth, leading for most of it, but led just 97-94 with roughly four minutes left. From there, though, they took over behind Tim Duncan, Tony Parker and Kawhi Leonard. Parker (24&10) and Duncan (19&11) both had double-doubles, while Leonard chipped in 13 on 5/5 shooting. Danny Green posted a big 21.

Utah played well, getting great games out of Mo Williams (29&9) and Paul Millsap (17&10, 3 blocks and 3 steals). Against a team like San Antonio, though, playing well usually won’t cut it.

Warriors (2-1) 114 at Clippers (2-1) 110
Blake Griffin went for 19 and 11 and Chris Paul posted 27 (19/20 FT) and 10 last night. Typically, that’s the opening sentence to a recap of a Clippers win. Not this time. Stephen Curry led the Warriors to a win with 23 points, including a number of big free throws late, and Carl Landry exploded for 23 points and 10 rebounds off the bench. The Warriors have some really good offensive players, and they came through last night, upsetting the previously unbeaten (for two games, but still) Clippers.

LA had a chance to pull the game out late despite Golden State leading for most of the way, but a late missed free throw by Chris Paul sealed their fate. The Warriors won just a third of their road games last season, so this was a big W for Mark Jackson’s club.