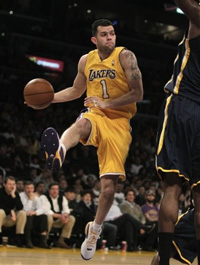 Oh, my goodness. It’s just after 2 a.m. and I am about 12 hours away from flying to LA for a week of basketball fun. I’m not sure if I mentioned it here –maybe because I was scared something would end up coming up and the trip wouldn’t end up happening– but I’m heading to LA for the next four days and then to San Fran for three days and I’m pretty pumped.

It’s my first time to either place and I’m finally going to be seeing the Lakers play at STAPLES. While my fandom may have shifted from one franchise to the league, players and good stories since I’ve started writing about the league as a whole, the Lakers will forever be where this dream started for me and watching them play in LA has been something I’ve wanted to do for years.

If all goes as planned, I’ll have a fun little story for you about that Lakers/Raptors game on Tuesday night. Oh, I’m attending as a fan, too. It’ll be just my second NBA game as a fan and not a member of the media. It’s going to be great. After Lakers/ Raptors, I’ll be catching the Warriors/Raptors at Oracle, which should be fun, too.

In fact, my friend and I are contemplating another trip to STAPLES on Wednesday night to watch the Clippers and Bucks. Ha. I know, I know, can’t get away from the game even on vacation. Who would want to, though? I mean, really.

Of course, the Lakers head home having lost three games in a row and will face Toronto on Tuesday. They are going to be fired up and as one Toronto writer joked last night, Kobe may just be looking to drop 82. I doubt that’ll ever happen, but you never can truly say never and it will most certainly be a tough game for the Raptors.

Thoughts on Matt Barnes faking like he was going to throw the ball at Kobe’s face and KB not even flinching? While Barnes was trying to be the intimidator, I thought Kobe was pretty damn badass when he simply continued to stare down Barnes. I wanted that final shot to drop for Kobe. I know he did, too. Even more than normal. Weird to imagine how it feels to miss what would be a game winner on the same court where you were winning championship number four the last time in Orlando.

In the end it was a 96-94 victory for the Magic. Vince Carter scored 25, Dwight had 15 points and 16 rebounds and Jameer Nelson added 15 as well. In addition, each of these players missed a free throw in the final minute of action, giving the Lakers room. While they escaped with the win yesterday, they would know better than giving a team with Kobe Bryant room to breathe.

Kobe finished with 34 points, seven rebounds and seven assists, Pau Gasol scored 20 to go with 11 rebounds and Ron Artest showed up with an insane purple and gold haircut that had “defense” etched into his head in various languages. Whatever works.

Got to catch Jrue Holiday up close last night and he was awesome. 21 points, seven rebounds and six assists. 8-12 shooting.

Man, wishing I had the new issue of SLAM to read on this flight today. I still think my favorite college cover is the Michael Beasley one from ’08. What about you?

I missed most of the bball action today, but did get home from the Raptors/Sixers game to see Ray Allen win the game for the Celtics as Boston broke the hearts of the Wizards, who had led all game before falling, 86-83. KG was 0-for-7 in the game. It felt nice to see Ray hit a huge three when it really mattered. A 20-4 run to close the game gave Boston the victory and prevented them from falling to the Nets and Wizards in the span of a week.

Everyone catch the shots of Chris Andersen drinking Starbucks on the bench during halftime of the Nuggets 118-106 victory over the Blazers? I couldn’t help but wonder what his drink of choice is.

Loved seeing JR Smith finish with seven assists to go with his 22 points. He’s such a better passer than we get to see. Another 30-point night for Melo and 21 points for Billups and Denver shot 59 percent for the game. Brandon Roy struggled, shooting just 3-for-14 from the floor for his 12 points. Jerryd Bayless scored 24 points to go with five assists and Andre Miller added 19 points in the loss.

Okay, it’s almost 3 a.m. now. It’s time I get myself to bed and dream of sunshine and sweet, sweet basketball. I’ll be checking in, but we’ll be deviating from the norm for a couple of days here as I take my first official vacation… Ever. Yay!