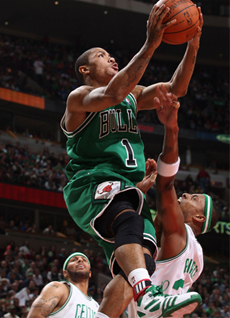 *I’m not actually implying that anything to do with LeBron is luck, I just liked the way the title sounds.

Bulls taking down the Celtics? Really? As I said yesterday, it feels more like April Fools day rather than St. Patricks day. I worked a night shift so unfortunately by the time I got home, all of the NBA action was over and I was stuck watching highlights and reading boxscores.

In other words… FILL ME IN.

Saw highlights of  LeBron, though. My goodness. Really, what else is there to say?

I’ve been rooting for Dwyane and have been singing that DWADE FOR MVP song, but Bron is totally drowning me out.

I think it’s inevitable. He will get that MVP award. I kind of hope that by saying those words, it puts the universe in motion and Wade follows this up with something ridiculous of his own tonight.

In case you needed the score, the Cavs took down the Magic, 97-93 and they needed some late game Magic from LeBron. That’s what I’ve been told, anyway. Bron also wore some pretty green and white shoes, I did catch a glimpse of those.

He scored 21 of the Cavs final 31 points and when his team was down one, in the final minutes, he drained a three in front of the Magic bench. He then knocked down free throws to close out the scoring. Rashard Lewis missed a three with 2.5 seconds remaining and the game was Cleveland’s. 30-1 at home. Winning is fun. Mo Williams added 21 points and Zydrunas Ilgauskas had 8 points and 11 boards for the Cavs. Dwight Howard led Orlando with 13 points, 15 boards and 6 blocked shots, but was almost invisible in the second half. Rafer Alston had 23 points and 5 steals and rookie Courtney Lee added 19 in the loss.

ATL killed the Kings 119-97 and Al Horford had a nice line of 23 points, 12 rebounds and 6 assists. Josh Smith had 21 and 10 and Joe Johnson added 20. The loss spoiled another nice line from Kevin Martin who finished wth 31 points on 14 field goal attempts from the floor and 15-17 from the line. The Kings shot 39% while giving up 55% shooting to the Hawks.

6.6 seconds of great, but painful basketball.

6.6 seconds of Andre Igoudala killing the Lakers after Kobe hit a jumper to put LA up two. The Lakers deserve this loss, getting outscored 32-20 in the fourth and failing to use the foul they had to give with 6.6 on the clock. Philly wins, 94-93, thanks to s 20-2 fourth quarter run that was started by Donyell Marshall. Iggy finishes with 25 on the night as Pau had 25 and 11 for LA and Kobe was held to only 11 on 5-15 from the floor.

And with that loss, the Cavs currently own the best record in the league. First to 54.

Few more things about that Lakers game, Alvin Gentry twittered about it and called Igoudala the “real A.I.”. What’s that about? Also, post game, Donyell, made it a point to talk about how he works with his assistant coaches and stays in shape to be game ready, even when he isn’t playing. I thought he may have caught a glimpse of Lang’s Links from Monday.

Speaking of ugly shooting, Rodney Stuckey had a rough night against Dallas shooting only 5-19 from the floor as the Mavs picked up the two point win, 103-101. The Pistons were without Rip (strained groin), Sheed (strained calf), and Iverson (back). Afflalo started in Rip’s place and finished with 16 points as TayShaun Prince led the way offensively, scoring 28 on the night. The Mavs were led by Dirk Nowitzki’s 30, as Erick Dampier added 16 points and 13 boards.

While googling to see why Rip was out, I found this video.

You know what makes me sick about not watching games? I missed all of the Celtics/Bulls game and when I checked the box and noticed Leon Powe had played exactly 4:22 minutes and racked up exactly0 personal fouls, I felt ill. Could he have injured himself? Messed up his knee again? What happened? I checked twitter, didn’t see anything, emailed Russ, who hadn’t heard either. Eventually, a coworker found the info out on the internet (he suffered a knee bruise), but I hate that feeling of being in the dark.

Kinda makes you wonder how we managed before live stats and the internet. When the scores in the newspaper the next morning, or a radio station that covered your team would have to suffice.

The Spurs sat Duncan and still overcame a huge game from Kevin Love to take down the TWolves, 93-86. Love finished with 17 points and 19 boards, but the Spurs’ 24 points from Tony Parker, 15 from Roger Mason and 12 from Fabricio Oberto were enough to keep them on top. Sebastian Telfair added 17 as well for the Wolves in the loss.

Utah smoked Washington, 103-88. Carlos Boozer finished with 13 points and 15 boards while Deron Williams added 12 points and 8 assists, but also 8 turnovers. Kyle Korver added 15 off of the bench as the Jazz finished the game shooting 50% from the floor as compared to just 36% for the Wizards. Washington were led by 13 and 10 from Antawn Jamison, 9 points and 13 boards from Andray Blatche and 14 point efforts from Nick Young and Juan Dixon.

I think that’s most of the action that went down last night, or, the brief overview. I’d love to have the blanks filled in, if you would all be so kind to tell me what I missed. I’ll be back in about an hour or so. Catch you then.