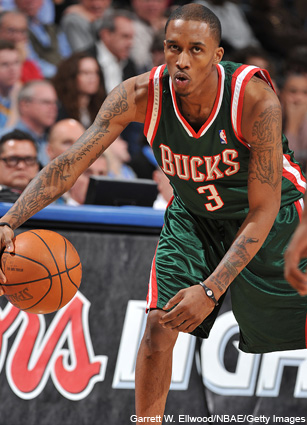 It was a great weekend of college ball, wasn’t it? From start to finish, overtimes, fantastic finishes, huge, huge upsets. It was everything college bball should be and then some. And apparently I angered some college fans when I tweeted that as much as I loved college, I was happy to be finishing my night by watching Milwaukee and Denver.

What do you guys think? I love the NCAA, I think the love and passion is some of the purest you’ll ever find. The stories are intriguing and many times amazing, but dammit, sometimes I wanna see guys make their free throws and not wait 27 seconds before tossing up a 3-pointer. I’m half-kidding and I do thoroughly enjoy watching NCAA, it’s just that for me, the NBA is better basketball.

And it’s the basketball that I love. Like that Milwaukee/Denver game mentioned above? The Bucks won. On the second night of a back-to-back after winning in double-OT against the Kings. They are rolling and it’s really fun to watch. In Sacramento, Brandon Jennings won the rookie battle, scoring 35 points and hitting a career-high eight 3-pointers while Tyreke Evans took an elbow to the face and suffered a bruised jaw and chipped teeth. As a result he’s out of action right now, so sending some quick get well soon thoughts his way.

After the Thunder throttled the Raptors on Friday night, they went into Indiana, watched the Jay-Z concert on Saturday night and then came out on Sunday and lost by 20 to the Pacers. Eeep. I flipped over, expecting to see OKC dominating and instead, I got the exact opposite. I wasn’t impressed.

In Atlanta, the Hawks took down the Spurs, 119-114 in overtime and clinched a playoff berth along the way. Al Horford was phenomenal for Atlanta, coming out on top in a battle with Tim Duncan. Horford finished with 22 points and 18 rebounds while Duncan had 29 points and 13 rebounds. The Hawks outrebounded San Antonio by 10 and overcame a 38-point effort from Manu Ginobili. Joe Johnson scored 20 points but also added 13 assists for ATL and after missing two shots to win it in overtime, he hit the jumper to give the Hawks the lead for good in the extra session.

When the Hawks were here last week, we were all raving about how good Horford was in the fourth quarter. That was on display last night as he went against Duncan for everyone to see.

LeBron watch: 15/3/7. That doesn’t feel right, but it is. Bron only played 30 minutes because this one was a laugher with the Cavs winning big against the Pistons, 104-79. While Bron and Delonte West had 15 points apiece, Leon Powe led the way offensively with 16 points off of the bench. You know I loved typing that. Boston fans, I bet you miss him. Wish he had gotten to stay with your team, but happy he’s found a new home.

Speaking of new homes: Shaun Livingston being signed by the Wizards for the rest of the season. Against the Lakers last night, he had a baseline slam to celebrate. That was awesome. While the Lakers won, 99-92, they had a sloppy, sloppy fourth getting outscored 32-17 after holding a 28-point lead in the third quarter. Pau Gasol had 28 and 12 for LA.

The Kings were able to get the 102-89 victory over the Clippers without Tyreke Evans as Beno Udrih had a career-high 17 assists to go with 20 points as Sacramento had 32 assists on 42 made field goals. On the flipside, the Clippers had 17 asissts and 17 turnovers.

In Phoenix, the Suns were able to outlast the Blazers in a 93-87 win that went down to the wire with Steve Nash clinching things at the free throw line. While Amare finished with 18 points and 14 boards, Nash added 17 and Jason Richardson had 16 and the Suns won a gritty one where neither team shot better than 38 percent.

In a 116-112 loss to the Rockets, David Lee poured in 27 points, 20 rebounds, six assists and two blocked shots for the Knicks. He’s good. Too good to be on a team that’s all over the place. Wherever he ends up next season, I hope it’s a better fit than this. Kevin Martin had 28 points for the Rockets as Chase Budinger scored 18 and Aaron Brooks added 16. Toney Douglas scored 25 points for the Knicks, hitting six 3-pointers, but a career-high 13 points from former Knicks rookie Jordan Hill and charges taken by former Knick Jared Jeffries sealed the deal for the Rockets.

One more thing about this one: Shane Battier left the game with a hyperextended knee. Well wishes being sent to Mr. Battier!

Hope you saw lots of bball over the weekend. I also hope you’re ready to dive into the NBA until Friday when the madness hits again.