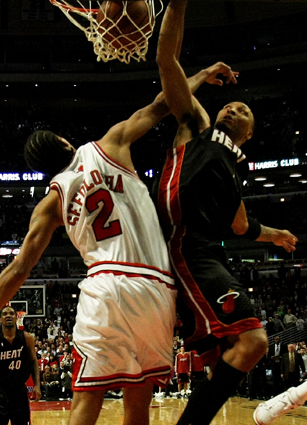 Great games for TNT last night. That Bulls/Heat game had a thrilling finish as Wade found Marion for the dunk with 1.1 seconds left, but my favorite from that was seeing Wade lose the ball and then steal it back to give his team another chance to win.

Then I liveblogged the Boston/Dallas game and all I was hoping for was for it to be better than the blowout the Celtics had in Boston over the Mavs. I got so much more than I had expected with the Celtics coming back from 15 down to take the 99-92 victory. This one was filled with technicals and emotion, intensity and drama. It also had a Rondo triple-double.

I don’t think there’s anything that gets me more excited than a triple-double. Of course, 61 at the Garden is exciting, or three-point records and huge dunks are always fun, but a triple-double is just so dominating. I think that’s why I love watching Chris Paul so much. You never know when he’s going to bust out and get one.

The crazy thing with Rondo is, he is such a great rebounder. Before you know it, one quarter is over and he’s already racked up 6 boards, half offensive. He’s a wild one.

What a great game that one was. I thought Dirk had it, and then he cracked and missed a free throw that pretty much sealed the game… For the Celtics.

So, it’s Friday and that means that All-Star Weekend is officially here. I’m hoping that Lang and Ryne have made it to Phoenix by now, or will shortly. Remember to check here early and often for all of the All-Star coverage from our guys in Phx.

Those Celtics sure know how to keep things interesting and taunt their opponent. While starting off slow, trailing for almost the entire game and falling behind by as many as 15, the Celtics made things interesting in the third as Kevin Garnett got fired up, tangled with Dirk Nowitzki and called for a technical. From there, Doc Rivers received two technicals and was thrown out of the game. Once they were fired up, there was no stopping the Celtics as they outscored Dallas 30-17 in the fourth, to take the come from behind win. While Paul Pierce was solid late, finishing with 31 points, including all of the big shots for the C’s down the stretch, Rajon Rondo had his second career triple-double with 19 points, 14 rebounds and 14 assists.  Dirk led the Mavs with 37 points and Josh Howard had 17 before fouling out in the loss.

Shawn Marion was the savior for the Miami Heat as the found themselves in a close one with the Bulls last night. While Miami led throughout, the Bulls almost pulled off a comeback in the fourth, and it was a thundering dunk from Marion off of a pass from Dwyane Wade with 1.1 seconds on the clock that gave the Heat the victory. When the Bulls took a one point lead in the final minutes, it was Wade who brought the Heat back, but he also turned the ball over late, giving Chicago a chance to steal the game. The Bulls were unable to take advantage when Wade stole the inbounds pass back, saving the victory for the Heat. Michael Beasley had 21 points off of the bench on 9-10 field goals. Wade finished with 24 points and Daequan Cook added 14. The Bulls were led by Ben Gordon with 34 points, Derrick Rose’s 18 points and 15 points from Tyrus Thomas.

While the Warriors came out of the gate blazing in this one and led by double figures most of the way through, the Blazers made things interesting in the fourth as they poured in 36 points while holding the Warriors to 25. Brandon Roy dropped in 37 points for Portland but they came up short in the final minutes as the Warriors made their free throws and Monta Ellis hit three big shots to keep the Blazers at bay. LaMarcus Aldridge scored 20 points for Portland and Greg Oden added 8 points and 11 rebounds. Monta Ellis and Stephen Jackson each had 20 points for Golden State, while Corey Maggette added 24 points and Rony Turiaf had 14 points and 11 rebounds.