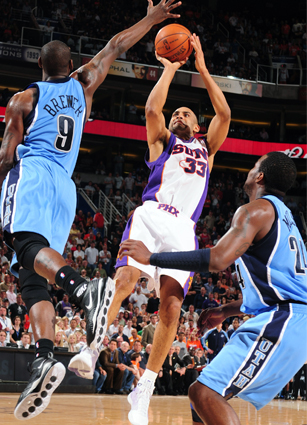 Two words for you. Two words, one name: Mike. Taylor. I think the SLAM energy was being felt by Taylor last night as he dropped 35 in MSG in the Clippers overtime win against the Knicks. His season average is 3.9 ppg, if you were wondering. Sunday, I spoke with Taylor for 10 minutes after the game (which will be posted today on my Court Surfing column if its the last thing I do!). I was the only reporter in the entire locker room who spoke two words to him. Last night at the Knicks/Clipps game, Matt Caputo spoke with Taylor pregame and again, was the only reporter to talk to him.

35 points later, he had his own media scrum. He knows what’s up though. SLAM can recognize talent when we see it. Loved to hear about those 35 points. Totally made my night.

About that final Dwight block against Pierce in the Orlando/Boston game… Anyone else think that might be a foul? I’ve only seen the highlight twice quickly, but I’m surprised that there wasn’t a call on that. If you saw the game, let me know. Good block, or non-call?

Also surprised to see the Nuggets take down the Hornets 101-88 until I saw the boxscore and realized New Orleans played without Tyson Chandler and Peja Stojakovic. The Nuggets were without Nene, who was serving game one of a two-game suspension for that headbutt in the game Monday night.

Manuuuuu was back last night, but it was all about TP, dropping 42 and 10. He’s pretty damn great and I never really give him his due.

29 points from Thaddeus Young in a Sixers win against the TWolves. They’ve been rolling as of late.

20 points and 7 assists for Jose Juan Barea in a Mavs win over the Warriors. Taking it, 128-106, the Mavericks remain three games in front of the Suns for that eighth spot in the West. Dirk Nowitzi had 26 on the night as Anthony Morrow led the Warriors with 29 off of the bench.

Went to the Raptors/Bucks game and was shocked to see the Raptors win, 115-106. This one was not nearly that close as Toronto led by 20 at the half and only allowed the Bucks to close the gap in the final minutes when the outcome had already been decided. The Raptors dropped 40 in the second quarter and shot 40 free throws compared to the 9 attempts for the Bucks. Six Raptors finished in double-figures, led by Chris Bosh’s 18 points, 14 rebounds and 5 assists. Anthony Parker scored 18 points as well while Jose Calderon had 19 points and 11 assists and Andrea Bargnani scored 23. The Bucks were led by 22 points from Richard Jefferson, 20 from Charlie Bell off of the bench and 18 points from Ramon Sessions.

My pick for eighth in the East lost to the Wizards last night. The Bobcats fell, 95-93 taking a hit in their hopes to make the postseason this year. While the Wizards dressed only eight players (but will have Gil come Saturday, if all news reports are correct), they had just enough to take down Charlotte. Antawn Jamison scored 27 points, Nick Young added 23 and Mike James and Andray Blatche each added 15. Gerald Wallace led the Bobcats with 21 points and 11 rebounds as Emeka Okafor and DJ Augustin each scored 15 points.

The Pacers took down the Heat 90-88 in a game that went down to the wire and came down to Dwyane Wade’s three-pointer at the buzzer that rimmed out. The Heat shot only 37% on the night and finished just 3-17 from beyond the arc. Dann Granger led the Pacers with 28 points while TJ Ford scored 20 points off of the bench, Jarrett Jack scored 13 points and Jeff Foster pulled down 16 boards. Wade finished with 21 points and 8 assists for Miami as Udonis Haslem scored 18 points to go with 14 rebounds in the loss.

Spurs took down the Hawks 102-92. Tony Parker with 42 points and 10 assists, Roger Mason with 18 as the Spurs rest Tim Duncan. Joe Johnson scored 30 for Altanta as Flip Murray added 15 off of the bench.

The Magic held on to take down the Celtics, 84-82, despite scoring only 14 points in the fourth quarter. While Paul Pierce got inside with 3.8 seconds remaining, Dwight Howard was waiting and he blocked a shot that would have tied the game to give his Magic the W. He finished with 24 points, 21 rebounds and 4 blocked shots on the night as Rashard Lewis scored 21 and Hedo Turkoglu added 13. Pierce finished with 26 points for Boston as Ray Allen scored 16 points and Kendrick Perkins had an 11-point, 11-rebound night.

Grant Hill wants to make the playoffs and he’s doing everything he can to get there. Last night the Suns moved to within three games of the Mavs for the final spot in the West (with a game against the Mavs still remaining). Hill led the way in a 118-114 victory over the Jazz last night, scoring 26 points. Matt Barnes added 21 points and 9 rebounds, Shaquille O’Neal scored 12 points to go with 12 rebounds and Steve Nash added 12 points and 14 assists. Deron Williams had 25 points and 10 assists for the Jazz as Ronnie Brewer scored 17 and Mehmet Okur added 15 points to go with 12 rebounds in the loss.