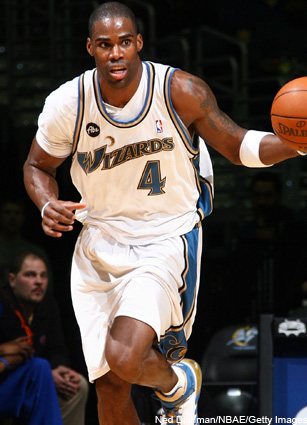 OK, waaaaay too much went on last night. I mean, my goodness. Wednesday nights are crazy enough on their own, but this trade deadline business is mad! Okay, so games, I don’t really know what to tell you, except, the Grizz stole one against the Raptors…. Or, the Raps gave the game away after being down 16 to start then leading by five with 37 seconds remaining. A Mayo three and a Z-Bo layup and there was overtime. In the extra session, the Raptors stupidly continued to switch so Jose Calderon was on Rudy Gay, and, well, Rudy took advantage, scoring eight straight for the Grizz to give them the win.

It was another rough night for Hedo, who was booed quite loudly when he checked into the game.

Rudy Gay is really fun to watch. OJ Mayo is really nice to talk to. He gives good, long answers. Wished I had the opp to sit down with him for a longer interview, like our man Tzvi did awhile back.

Grant Hill and Dirk Nowitzki were jawing at each other in Dallas where the new-look Mavs got the 107-97 victory. Weird, right?

CJ Watson went OFF against the Kings as the Warriors raced to a 130-98 blowout win. Watson had a career-high 40 points on a ridiculous 16-for-23 from the floor. He was balling as he started for Monta Ellis who is expected to miss another week of action. Steph Curry had a career-high 15 assists and the Warriors rolled all over Sacramento, taking over in the second quarter when they outscored the Kings 42-16.

33 points, 17 rebounds, three assists and seven blocked shots for Dwight Howard in a 116-91 victory over the Pistons. Love seeing big numbers from Dwight like that. I miss the Dwight from last season. Anyone else with me here?

The Heat managed to scrape by with the 87-84 victory against the Nets in New Jersey and did so without Dwyane Wade for most of the game after their superstar left the game with a strained left calf. Michael Beasley led the way for Miami with 23 points and 10 rebounds in the win.

Meanwhile, as I was filing a story and going home, news was breaking. The Kings are letting go of Kevin Martin, Hilton Armstrong, Kenny Thomas and Sergio Rodridguez for Tracy  McGrady, Joey Dorsey and Carl Landry. Who knows if they’ll keep TMac, but they’ll most certainly keep Landry and Casspi is going to love playing with a hard-nosed guy like Carl. I really like that piece for them. Didn’t expect them to be in such a rush to let go of Martin, though.

Now, the Cavs. This went down in the first half of my game. They accquired Antawn Jamison and Sebastian Telfair while shipping Zydrunas Ilgauskas, a first round dradt pick and the rights to Emir Preldzic to Washington. Drew Gooden was sent to the L.A. Clippers and Al Thornton was sent to the Wizards. You get that?

All you need to know is that the Cavs were able to keep J.J. Hickson, attained Jamison and are going to be really, really good. They’ll probably get Z back in the end, too. Nuts. I’m just happy for Antawn. He deserved a better situation than the one he had in Washington and the fans in Cleveland are sure going to love him. Now, to see how it all falls into place.

In other smaller trade news: The Knicks traded Darco Milicic to Minnesota in exchange for Brian Cardinal.

The Bulls will send John Salmons to Milwaukee for two expiring contracts in return. According to ESPN, these contracts may be Kurt Thomas and Francisco Elson or Hakim Warrick and Joe Alexander.

A deal between the Knicks and Celtics is expected to go down today, sending Nate Robinson to the Celtics for Eddie House and another contract, perhaps J.R. Giddens.

Now, I’ve gotta get myself to the ACC to see if they make any moves today. I’m hoping not! Also hoping I can get back into the normal swing of things tonight. At least the trades will be over by then, right?