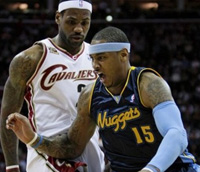 Oh boy. NBA on TNT Thursdays. Thank you, thank you.

If you haven’t heard, TMac is headed to New York, Ronnie Brewer is headed to Memphis and Nate to Boston/House to NYC is finally official.

In the first match up of the evening, we had the Nuggets in Cleveland, looking to snap the Cavs franchise-high 13 game winning streak. We also had LeBron and Melo matched up and what a battle it was. While Antawn Jamison was unavailable for his new team, he had one hell of a show to watch on the Cavs bench. Denver had control of the game early, but of course, the Cavs came back, led by LeBron. Through the fourth, the game went back and forth, with the two making big shot after big shot, until the end of regulation. While the Cavs went to Anthony Parker for a corner three and he came up empty, Chauncey Billups also took a three and missed. When Anthony Parker’s heave at the buzzer was off of the mark, the game went into OT.

LeBron already had a triple-double.

In the extra session, it was a shootout between the two superstars and former Olympic teammates and with 1.9 seconds remaining a perfect –tightly guarded- jumper from Melo gave the Nuggets the victory. LeBron had a chance to win it, but slipped, still managing to get a decent looking shot off.

Melo finished with 40 points to go with six rebounds and seven assists. LeBron became the first player since Oscar Robertson in 1962 to finish a game with 43 points, 13 rebounds, 15 assists, two steals and four blocked shots.

Whew. How fun was that one? I know I didn’t begin to do it justice in that recap. I’m happy for Antawn and can’t imagine what he felt watching on the sidelines. From that mess of a disastrous season in Washington to this? He’s got to be jumping.

Felt for LeBron when he walked off, looking pained at coming up short. For everyone who’s angry he didn’t shake hands, it’s a regular season game. It happens. More often than we probably pay attention to.

I could handle a finals match up between those two. Yes, yess.

Moving along to L.A. Without Kobe Bryant, the Lakers gave the Celtics their best shot and almost got them, falling just short in a 87-86 decision to the men in green. The Celtics were without new acquisition, Nate Robinson, and in the end, the Lakers had the ball with 2.2 seconds remaining. An awful final possession that ended with Derek Fisher trying to draw a foul on a 3-pointer showed just how important Kobe Bryant is in the final seconds of a close game.

After a Celtics miss and Lakers rebound, Pau Gasol called a timeout as Lamar Odom was running upcourt and it hurt the Lakers. I would have preferred they just played the possession out to see if they could have got a bucket in transition, but hey, without Kobe on the floor he probably wasn’t sure what they’d do either.

Ray Allen was awesome for the Celtics, hitting 10 of his first 11 shots and finishing with a game-high 24 points. Rajon Rondo left his sharp-shooting in Dallas, struggling offensively shooting just 6-for-17 from the floor. He did finish with 14 points, 11 assists and five steals though. Kendrick Perkins finished with 13 points and 14 rebounds, offsetting a 6-for-16 night from Kevin Garnett.

For the Lakers, Pau had 22, but either didn’t get the ball down the stretch, or did silly things with it, like trying to feed Shannon Brown on the baseline, turning the ball over. Odom had 13 points and 14 rebounds off of the bench and I just need to take this sentence to rave about the dunks he had tonight. That second one was spectacular and I can only hope for more of that Lamar.

I hope you all saw Ray Allen’s dunk over Shannon. It made me happy.

Thoughts on the deals? I just want LeBron to resign in Cleveland and then we’ll go from there. While it’s got to be a big decision for Wade and Bosh, I can’t even begin to imagine leaving your home for another team. LeBron IS Cleveland. It’ll be nuts if he goes. I’ve been thinking about it a lot lately. The summer of 2010 is going to be wild. Or, everyone will resign and it’ll be boring.

It’s why you’ve got to love this game. Always unpredictable. Always, always awesome.