The Return Of The Bynum Brigade 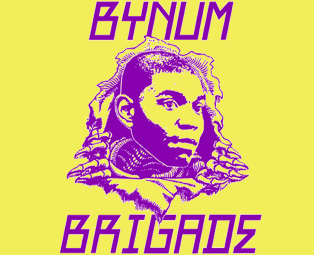 When I went to L.A. a few months ago to write about Andrew Bynum, I wasn’t really sure what to expect. Who was I to know that a day later I’d be at Quizno’s with Bynum and that I’d inadvertently cause Bynum to have to hire a nutritionist?

Anyway, I arrived in L.A., parked and was walking to the Lakers/Bulls game when I came across a bunch of guys on the sidewalk wearing matching yellow t-shirts. I looked closer and discovered they were all members of The Bynum Brigade. I steered clear of them but made a note, and they eventually worked their way into my story in the mag.

Since then we’ve been in touch and the guys made me an honorary member of the Brigade (I think — if not I hope to someday be), sent me a lovely Bynum Brigade t-shirt and shouted us out on their website.

They emailed yesterday to let me know they’re planning another night out at the Lake Show. “I even wrote a press release!” Bynum Brigade VP Mikey emailed me. He also offered to buy me a $10 beer if I made it to the game.

I don’t think I’ll make the game, but I told them I’d help spread the word. Because anything by the fans and for the fans, I’m with it…

Based on a design for the Powell Peralta “Bones Brigade” skateboard team from the 1980s, the Bynum Brigade t-shirts have been hot items, worn by celebrities such as actor David Arquette and Girl Skateboards’ Rick Howard. All club members must wear the shirt to the games, promoting team unity and t-shirt sales. Having sold out the initial run of shirts at a November Laker game, the Bynum Brigade has printed an additional supply for the April 8th game, and to satisfy the online demand.

At the March 16th game, the Bynum Brigade will be hard to miss as they purchased staggered seating in groups of four around Staples Center to maximize exposure and fan participation. “Previous games we purchased seats in a row, which is fun, but splitting up the Brigade allows us to impact the entire arena, hopefully increasing our positive influence on the game,” said Mikey Carosel, Bynum Brigade VP.

Bynum Brigade game trips are no staid affair. The Brigade utilizes Los Angeles’ fledgling public train system, eliminating the need for designated drivers. Beginning their pre-game festivities at the Hotel Figueroa poolside bar, the Brigade continues during halftime at “The Deck,” an outdoor area at Staples Center serving beer and snacks. “The deck is an important part of our trip. We really spread the Laker love and meet up with a lot of friendly fans,” said Benny McBeverly.

Post-game will find the Brigade at any number of local watering holes. With membership growth, and a popular MySpace page, the March 16th game should prove to be the most successful Bynum Brigade trip yet. “It’s great selling t-shirts and cheering on the Lakers, but the most important aspect of our trip is having fun with good friends both old and new,” said Benny McBeverly.