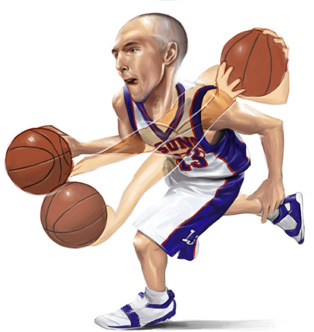 For some reason, you readers think I hate Steve Nash and the Suns; I can’t tell you how many angry emails I’ve received from Suns fans, accusing me either of dissing or hating on the Suns. I like watching the Suns, though, and I like Steve Nash, and I think the Suns are going to win a ton of games again this season. I still don’t believe they can make it all the way through the postseason playing a slower brand of ball, though, especially with Amare still hobbled. Regular season? They’re tough to beat. Postseason? I don’t think they’re winning a title as long as they’re trying to just outscore everyone.

For some reason, you readers think I hate Kobe Bryant and the Lakers; I can’t tell you how many angry emails I’ve received from Lakers fans, accusing me either of dissing or hating on the Lake Show. And…well, enough of that. Thing is, I don’t really hate the Lakers, or even Kobe for that matter. I just don’t like watching them play the way they played 82 games last season, with Kobe taking all the shots. What I did like was watching their postseason run, when they played team basketball and shared the rock. Will that continue this year? I think so.

The Clips shocked the world last season, and this summer they re-signed Sam Cassell and then gave big money to Tim Thomas. I think they’ll still be a good team, but this year everyone will be watching out for them and not taking them lightly. I think they’ll make the Playoffs, but it won’t be a runaway like last year.

Golden State is one of the teams I called a “Wild Card Squad” in the magazine: There’s no telling what they’ll do. I wouldn’t be surprised if they win 45 games, and I wouldn’t be shocked if they win 25 and Nelly quits by the end of the year. I’m putting them fourth to play it safe.

The Kings really aren’t that bad a team, but they’re in a stacked division. Maybe next year.