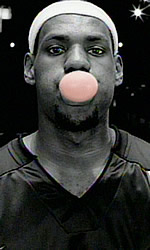 Hola. So I missed the last few days around here because I was out of the country. Specifically, I went to Spain. Even more specifically, I went to Barcelona, among other places in Spain, working on a story for the next issue of SLAM. Can’t tell you why exactly, but I can tell you that I’m pretty pumped up about the story. You’ll find out plenty about it in the next few weeks. I’m excited about the story, about the unprecendented access we received, everything.

And really, is there any better place to be traveling for business than Barcelona? If you like seeing the world and you’ve never been, you should go, asap. Gorgeous, gorgeous place, with really, really cool people. And Ronaldinho plays there. How cool is that? I wish I could’ve stayed longer. Alas, SLAM was calling…

Catching up on what happened while I was gone…

• Apparently everyone decided LeBron isn’t playing all-out, which is interesting since that was one of the themes in my LeBron/SLAM 106 cover story that came out a month ago. People are trying to figure out if LeBron is coasting right now…and the answer is absolutely. He said it himself.

The bigger question is, Should he be coasting? I think it’s the smart move. He’s played for the last two years in a row without a significant rest period, and he doesn’t want to break down like D-Wade.

(By the way, anyone else notice that Wade, LeBron and Melo all have pregnant wifeys with babies due in the next few months? Now they won’t need a excuse to sit out the Tournament of the Americas this summer.)

• OK, are people still talking about All-Star Weekend? Seriously? Jason Whitlock wrote a post-All-Star column that got everyone riled up, and then our man Dave Zirin went on the attack right back. (Henry Abbott is all over everything here.) Look, I was there for the entire weekend. I slept about 6 hours the entire weekend. I was with 3 co-workers the entire weekend. And none of us were scared, none of us thought we were going to be attacked by gangs. Yes, there were a lot of young, drunk people there. Yes, a lot of them were black. But there were a lot of white people there, too. Can we move on now?

• I got a 2-way message from Russ about Shaun Livingston’s knee injury while I was in Spain, and I am choosing not to watch the Youtube clip of the incident. As a journalist I probably should watch it, to have some historical perspective and a reference point. As a human being, I don’t particularly want to see Shaun Livingston dislocate his leg “like, to Rhode Island,” as Russ so delicately emailed me.

It’s too bad for Shaun, who consistently shows flashes of brilliance but can’t stay healthy long enough to prove himself.

• They’re doing it very, very quietly, behind an oddly silent Mark Cuban, but the Mavs are now established as the team to beat in the NBA. The Finals go through them. Phoenix, step your game up.