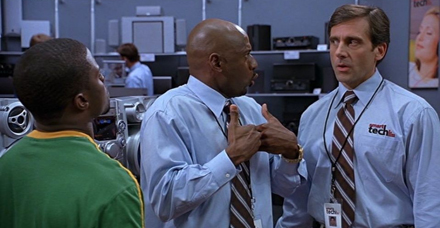 Every time I think about how this Knicks-Steph fiasco inevitably spiraled out of control, I keep thinking about that classic scene from “The 40-Year-Old Virgin,” the one where Romany Malco’s Jay and a character played by Kevin Hart engage in a salesman-customer dance that ends with Hart threatening to return to Smart Tech and “clap all y’all ni&&as!” and an enraged Malco responding with a goating exhortation for shortstack Hart to “Aim high, Willis!”. Steph, similar to Malco, spent the past two months subduing, what had to be, inner-rage and an inclination to act out, only to have his antagonist–the Knicks, in Kevin Hart mode–finally push him to errupt.

Remember this “Virgin” scene, though? The comedy is in watching Malco make a series of allowances and nums his ego while Hart milks him. Malco’s tension in his jaws and periodic, Woosa-breaths are every indication that he’s trying as hard as he can to keep this encounter from turning into an incident. But as some point, Hart pushes him over the edge.

Their customer-salesman relationship started rapidly deteriorating when Hart made one last attempt to take advantage of Malco. He says, “Wait, wait, wait…last thing. I’m also gonna need that extended warranty for the price of ‘on the house’.” Malco, dejected by Hart’s hubris responds, “That I can’t do.” Hart, in full But We Both Black Mode, tries to send Malco on a guilt-trip, coming back with, “Well don’t be a Negro, be my ni&&a. Aight? Help me out.” Malco gets a little indignant: “Woa, woa, hold up–I ain’t nobody’s ni&&a.” Then Hart–with one of the great lines in the history of moving pictures–let’s Malco know what he thinks about his buppie-humbrage: “Well, you somebody’s ni&&a, wearin’ this ni&&a tie.” He even flips Malco’s tie for extra emasculation. At this point, Malco is ready to explode and satisfy his confrontational inclination, but he makes one last attempt at diplomacy–albeit a poor one. He says, “Well now you’re being condescending. You’ve been warned. Aight? Let’s move on amicably…” Sensing the situation just got real, Hart interrupts, “Look, check this out, dawg, first of all, you’re throwing too many big words at me. OK, now, because I don’t understand ’em, I’m gonna take ’em as disrespect. Watch your mouth and help me with the sell.” He’s basically telling Malco to play his position and stand down–ya know, customer (or coach or GM) is always right. Malco splits his whig: “See?! Now you found yourself a ni&&a! You was lookin’ for a ni&&a? ”

In reality, Malco’s behavior was unprofessional to the point of absurdity, but I always finish watching that scene as a sympathizer. If there was a way for Smart Tech to discipline the customer instead of Malco.

This is the scene I keep in mind as Steph falls deeper and deeper into the depths of petulant behavior. Steph is on 10, right now. He’s basically saying “See?! Now you found yourself Steph. You was lookin’ for Steph? Steph is here now!” Whether or not he’s pronouncing the Knicks-Steph marriage over or likening the fallout with his teammates as dishonorable army deaths or giving contract ultimatums, it’s all classic Steph: Childish, bratty, obstinate, obnoxious–basically every toxic characteristic in the book. But, like Malco, he tried. He really did. Steph tried to be cool about this hopeless situation. I put a lot of stock in his good-faith effort during the preseason when he came off the bench and performed well, draped head-to-toe in good-citizen garb. Not a word, not a frown. It was anti-Steph behavior and it continued into the regular season as he racked up DNPs, taped to the bench where he looked like a humiliated schmuck. Steph didn’t go Steph until his general manager, coach and teammates tried to clown him. D’Antoni’s side of a disputed story painted him as insubordinate; Walsh responded with what he deemed to be unfair discipline; and then teammate Quentin Richardson started throwing extra-heavy salt.

That Steph’s most recent behavior registers low on the Grant Hill Scale of professionalism is somewhat beside the point. How about the fact that he’s been disrespected and ostracized for a full two months? I find it disingenuous for Knicks management and players to expect Marbury to behave any way other than an outcast. Q meant to disparage Steph when he said “I don’t look at him as a teammate.” He said it as if to say Marbury’s behavior precludes him from being looked at as a teammate. The irony, however, is that D’Antoni, to use one of Steph’s terms, “banished” Marbury from the squad at the beginning of the regular season when he told his most talented player that he wasn’t a part of the team’s future. To me, that’s code for, “You’re not a part of this team.” So forgive me for scoffing at the hypocrisy of Q’s finger-wagging reprimand when he said, “You’re not going to allow your teammates to be left out there the way we were basically being left out there.” Steph obviously picked up on the laughable self righteousness when he responded: “When things got bad and then worse, guys like Quentin Richardson say, ‘I don’t consider him a teammate. He let his teammates out to dry.’ He didn’t care I was his teammate when I was banished. They left me out for dead.”

No matter how smooth the preseason went, no matter how many times Steph talked about just wanting to play and his willingness to accept any role, this relationship was doomed for failure. Back in 2003, a few weeks after replacing Frank Johnson as the Suns coach, D’Antoni had this telling thought about Marbury: “I think he’s sometimes maligned because people want him to be something that he isn’t,” he said. “Everybody has their idea of what a playmaker is, and what you should be doing. Some people are what they are, and Steph’s pretty good. He’s an All-Star. You have to be careful about trying to make him into somebody else. Let him be Stephon Marbury and give everybody else a role around him to make it all work.”

A few weeks later, Jerry Colangelo and D’Antoni sent Steph packing, trading him to the Knicks. Apparently, Steph couldn’t be what D’Antoni wanted him to be, so he got rid of him. Coming into the Knicks job, it’s been reported that D’Antoni accepted the job on the condition that Marbury would not be on the roster. When the Knicks signed Chris Duhon in July, promising him the starting point guard spot, it was clear that Steph was a short-time Knick. The problems arose when Walsh wasn’t able to successfully deal or buy-out Steph before the season began. It bears mentioning that Walsh’s surprise at Steph’s early DNPs seems to be a curious reaction. What, you thought D’Antoni was going to delay the direction he’d mapped out for the team and play a player he wants no part of? Why, because he’s on the books for $21 mil? Of course, D’Antoni, Walsh and the Knicks organization are playing this perfectly when it comes to the public opinion battle. Steph the Brat has assumed the bulk of the blame from media and fans. It’s interesting, however, that most players-turned-analysts (Kenny, GP, CWebb, etc.) have expressed a conspicuous amount of sympathy/empathy for Steph. They know how the Blame Game plays out. If I could give Steph one piece of faulty, fantasy-world advice, it would be to keep repeating one childish–but appropriate–phrase: They started it.

Vincent Thomas is a columnist and feature writer for SLAM. He can be reached at vincethomas79@gmail.com.