The Suns win by playing defense? 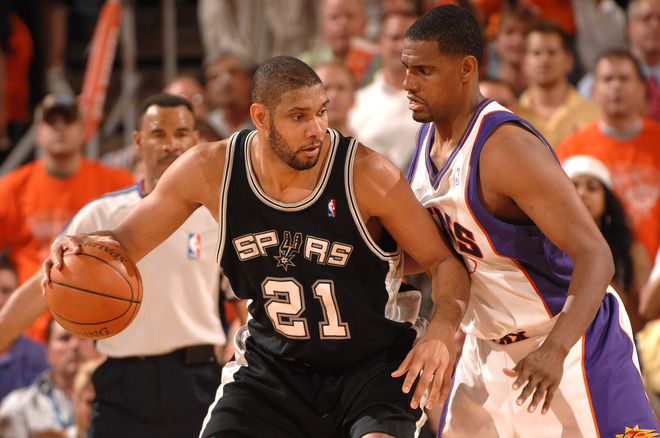 One thing I thought I understood about the NBA is that the team that dictates tempo has the advantage. Whoever determines what style of ball will be played, should win the game. Mike D’Antoni pulled an Avery, and shifted his starting lineup so Krazy Eyed Kurt Thomas could offset some of what Tim Duncan does in the low post. The results were that he made life a little harder for Timmy while hitting 6 of 7 shots himself. Phoenix played a low scoring game (for them) and came away with a blowout win. VERY rare. A 19 point first quarter for the Suns is sort of like a mortal team scoring 4 points in a quarter, and the Spurs led after one. Phoenix slowed down and played a “playoff” type of style, specifically the Spurs style, and they won. That is interesting.

The theme of Phoenix being the fun and gun team that plays no D has been beaten to death. When they talk about how “We’ve got to get stops” to win the championship, people for the most part roll their eyes and see that as all talk. Well, the Suns backed it up and avoided falling into a disastrous 0-2 hole heading to San Antonio. Now the series is tied and they’re off until Saturday. Cub will have much more on all of this.

In the East, LeBron and the Cavs took care of their home court. Now the Nets have to respond. Remember, Houston started out 2-0 in their first round series, and the Jazz got back in it by simply winning their home games. Jake will have more on this game later today.

Time to make you all cry.

It is a very bittersweet day for slamonline. Omar the Gangsta Critic, our star writer and movie reviewer, has moved on to blog for a site that will actually pay him. Congrats Omar! We will miss you and will definitely direct people to the new site whenever that address is known. His final review for us will be up either today or tomorrow. He will be missed, and I’m getting emotional just thinking about it now. I… I can’t go on…