The Yin & Yang of Yao 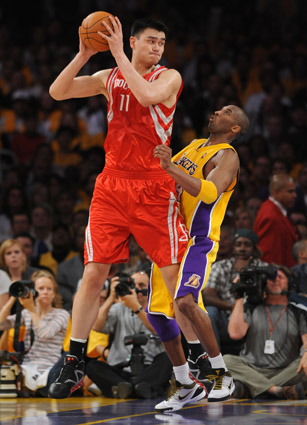 It’s not official just yet, but word is out that Yao Ming will be hanging up his No. 11 jersey this summer, and in celebration of the big man, we’re running all four of his SLAM features this week. We’ve already brought you stories from SLAM 69, SLAM 88 and SLAM 115,  and below you can read Jake Appleman’s piece from SLAM 130 (August ’09).

Eleven Chinese media members surround Yao Ming in the visitor’s locker room at the Staples Center before Game 2 of the Rockets’ second-round tilt against the Lakers. Somebody asks Yao something in Chinese. Yao responds in his native tongue. Everyone laughs. Somebody else says something in Chinese. Yao responds. Everyone laughs. The process repeats itself a few more times. With every response, the laughter’s volume builds incrementally. There’s something cool about what’s going on. So many NBA interviews have a put-on feel to them, as if all parties involved would rather be somewhere else. While much is lost in translation, this interaction feels genuine. This media cluster loves Yao, and Yao appreciates them. For someone so ridiculously famous, Yao’s down-to-earth vibe is palpably refreshing. In fact, many players from overseas have this type of connection with reporters from their homeland. Camaraderie is built out of a familiarity of language and a mutually shared momentary escape from a foreign land. For a literal giant in a circus that promotes aerial acrobatics, the grind can probably feel damn lonely, especially if, like Yao, there’s nobody else quite like you.

All of this to say, not only is Yao Ming completely unique, he’s also a paradoxical figure, the yin and the yang of the low post. He’s arguably the most famous person from the world’s most populated country, but more of his countrymen choose to wear the jerseys of other players they identify with (Kobe, LeBron, AI) instead. Yao’s the star around which his team’s offense orbits, but too often he just doesn’t get enough touches or shots. He’s 7-6, but his exuberance is about 6-2. He made significant statistical leaps in his third (double digit rebounds) and fourth (25 ppg) seasons, but missed the Playoffs both years due to injury. He might be the best at his position in the League, but few truly like to talk about it; maybe it’s that he’s a center who uses an unprecedented, new-age combination of height, finesse and touch to get the job done which frustrates pundits looking for athletic muscular bangers with megawatt smiles in the Shaq/Dwight Howard mold. To that end, he may rack up the All-Star votes, but he doesn’t etch his name in mid-February lore with dunk contest antics or potent quotables.

In a media climate focused on Twittering tweets and the word on the streets, it’s beginning to feel like Yao may never surpass the hoopla of his first two seasons. He was a freakishly tall and talented import, unlike anything we had ever seen; now that we’re used to him, American attention drifts away. It’s a League that markets superstars, and Yao has the grace and wit to be a true transcendent personality, but that only seems to carry over when he’s dealing with a Chinese media contingent. He’s a Hall-of-Fame talent who might be remembered more for how he helped globalize the game than for his game itself. During an era defined by quick whistles, speed, guard play and a dearth of legitimate big men, that possibility is unfortunate. Yet as he enters his prime, Yao has all the ability and talent around him to change that. As it often is in this League—and rightly so—in the end it’s all about winning. While the juxtapositions continue to pile up, Yao may finally be able to line up some of these skewed contradictions for two major reasons: 1) Now, it’s his team and 2) He’s finally gotten out of the first round.

In fact, the Rockets’ encounter with the Lakers is their first trip to the second round in 12 years. And today, they’re up 1-0 thanks in large part to a virtuoso performance from Yao. In Game 2, he’s lost to foul trouble for much of the game and doesn’t register his third and fourth points until early in the fourth quarter. After the game we ask him about the foul trouble and he responds, “The first two I have no comment. I have no comment. You need to play legally.” He also learns the word “split” in the press conference, which is fitting given his contradictory qualities.

He stays away from foul trouble in Game 3, and gets back into a groove in the first half. He showcases his patented eight-foot fadeaway from the left block on more than one occasion. It’s a shot that can’t be blocked because of his mammoth size. He also uses his body to aid teammates on their way to the hoop, sealing Ron Artest’s man as the Rottweiler drives baseline, and he follows speedy point guard Aaron Brooks to the hoop on a high screen-and-roll, which forces a help defender to commit off of Carl Landry. The result is an easy dunk for Landry. Says teammate Luis Scola, “He’s a great player, and when you play with great players around you, it’s always easier. Everybody has to collapse on him. Everybody’s focus is on him. And that creates spaces for everybody else.”

This activity from Yao benefits his teammates in another way: their three-point attempts are generally of the wide-open variety. Without Yao on the floor in Game 2, Artest was flinging low-percentage, long-range bombs at a pretty alarming rate. More often than not, when a pivot of Yao’s caliber is fed in the post and the double team comes, the ball moves out of it and swings from side to side with much greater ease.

The second half of Game 3 is a different story. Yao starts by missing a midrange jumper and the Rockets go away from their big man after the Lakers make some excellent defensive plays on him. Coach Rick Adelman is shown on the bench gesticulating hand signals that would seem to indicate a desire to pass it inside, but that doesn’t happen and the Lakers win going away. Stylistically, Adelman makes no bones about his desire to lead with height. ”He’s been our rock,” the coach says. “All year long, he’s been the guy.  It’s always nice to say, ‘Let’s post him up.’”

When Yao breaks his foot in the second half of Game 3, everything changes. Most write the Rockets off, only to feel silly when they spank the Lakers in Game 4 in Houston. The Game 4 win gets pundits thinking that maybe the Rockets could be just as good as an undermanned hustle and flow squad with no certified go-to All-Star. The 7-6 barometer by which the team is judged is suddenly gone and mostly forgotten.