There is a Popovich for all of us 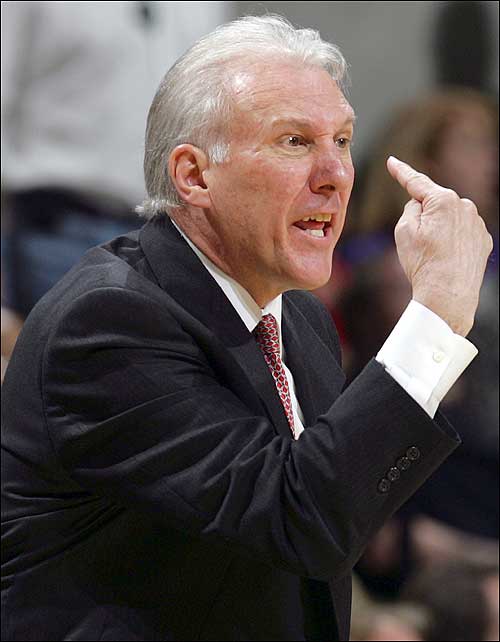 While Billy Donovan has captured the basketball headlines for the time being, a less dramatic and more successful coach is laying low. Ben Collins has been on top of the saga of Billy. Is it about loyalty? Money? Opportunity? Career advancement for the sake of career advancement? It’s all very interesting. Billy has a resume that includes two national championships and an earlier trip to the title game, but Gregg Popovich is about to have four rings.

I started thinking about Pop yesterday when I was spending time with the closest thing to a Popovich figure in my life. We all have them, that one authority figure that is so intimidating you just want to please them and maybe fear for your life in the process. My Popovich is not a coach or a boss or parent or teacher. She’s just someone that works for my optometrist.

Think about the Spurs for a moment. When they take off on a fast break, or even in the half court offense, Bruce Bowen always ends up in the corner, in position to take the only shot he can make. Not only does Bruce go to the right spot every time, but everyone else on the team knows that if they throw a pass to the corner, Bruce will be there. That comes from years of drills. I assume there was yelling involved. You may have heard of Pop being described as a drill sergeant or any number of military related metaphors loosely playing off his history as an Air Force man.

Twelve years ago, this woman taught me how to put contact lenses in my eyes. It was a rough day for both of us. She abused me verbally, but after a few hours I think I learned the lesson. I was a well-drilled contact lens inserting machine. It sounds trivial and not like something you would ever give even a passing thought to in your life. But there I was yesterday in the waiting room (for about 2 hours!!! I finished a novel!) and she walked by. Even though I am a grown man and she is now an old woman on the verge of retirement, I got real nervous. That is respect, and for whatever reason it got me thinking about Gregg Popovich and the respect he generates from his players.

When you think of other great championship winning coaches from the recent NBA past, it’s people like Pat Riley, Phil Jackson, and Larry Brown. Those three all have great basketball minds and have put in years and years of study, but really at this point they carry themselves like the tabloid celeb of the day. Billy Donovan is heading that way too, just like Bill Cowher and Joe Torre. Does he still have it? Does he want to be here? What’s with his contract? Will he quit? Will he stay for one more year? OMG OMG OMG!!! It’s always drama with that crowd.

Through the Spurs title runs, you never hear anything about Pop going anywhere or negotiating anything. He is about to win his fourth title. Can the Cavs pull off the upset? It was one thing for Mike Brown to do a less self-damaging job than Flip Saunders in a playoff series, but that is not happening in The Finals.

Alright, it’s Tuesday. Still have two more days until The Finals start. Waiting. Bored. I wrote about a trip to the optometrist. That says it all.