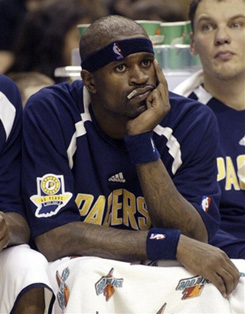 Either the SLAM nickname for Stephen “Whoo” Jackson is catching on, or his home fans are booing him. This is not good for the Pacers. Thinking back to the brawl, their fans were never put in a position to boo their own players because of how Sternbot shut down their season with those suspensions. They were put in the positon of playing the Pacers vs. the universe card. But now, they’ve decided that what Jackson does off the court in his free time is cause for booing. His teammates sort of kind of claim to have his back in a wishy washy way, but it’s not that convincing. I guess Tinsley and Marquis Daniels are in a similar boat, and maybe this can somehow make them a tighter group as a team, but this is ugly. For the third straight year, the Pacers are going to have a season full of drama. Last year we had a David Harrison diary on the old website and he said somthing about how every year something crazy happens, with year one being the brawl and suspensions and year two being Ron Ron’s time out for insubordination. He joked that he was curious about what woud happen this season. Well, here you go. This is not going to end well.
Please note which finger Stephen is using in the photo.