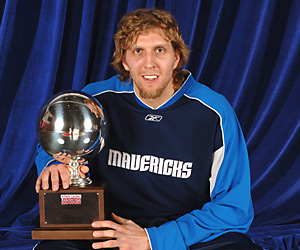 I forgot to mention this last week, so I might as well get to it now. The three point contest competitors have been announced. This is really the only non-game part of the All-Star Weekend that ever makes any sense. The rules are simple, you shoot, there’s a money ball, you run to the next rack, and have to do it in a limited time. I have no idea where they came up with the rules for the dunk contest or what they are. The skills challenge is cool, but kind of random. 2ball and celebrity ball or whatever else they have on Saturday night makes no sense.

With the three point contest, there are no judges. It’s just a shooter and a clock. No controversy. This year’s contestants are:

If Damon Jones wins, we’ll never hear the end of it. I’m fine with anyone else winning. Check out Jason Kapono’s percentages though. Oh my GOD!!! 47% for his career? The Cavs cut him and Charlotte picked him up before he wound up with the Heat. Kapono is winning. Easily. If I were a gambling man, I would perhaps wager on it. However gambling on sports is wrong.

Our flight to Vegas is less than 70 hours from now!!!

I know this isn’t the most exciting topic, but who do you think will win? Do you care? Come on, it’s better than the 4 hour dunk contest. Guys hit a higher percentage of threes than dunks on this Saturday night, and I’m not making that up.