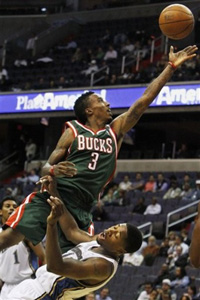 1. Can the New York Knicks keep up with the Celtics? The Knicks played hard last night the whole way through. They were down by 6-10 points for most of the game but they showed lots of heart on the road and didn’t let the game fully slip away from them — a very good sign. The main reasons that the Knicks lost was because they got absolutely pounded on the boards (54-38) and were 33 percent (9-27) from three-point range. Rajon Rondo continued the assist clinic that he’s been putting on that he’s been putting on through three games (17 assists per) by finding players all over in transition while the Knicks D scrambled to find their man.

2. Will DeMarcus Cousins or Derrick Favors walk away with bragging rights after the Kings face the Nets tonight? Neither one of the big men shined, so for this one we are going to go with the player who won the game and that was Derrick Favors. Cousins had 12 points and 4 boards, but he fouled out in 21 minutes of action and the Kings definitely could have used his presence down the stretch. Favors had 10 points and 7 boards in 20 minutes of action and his team came away with the W so he seems a tad more worthy of the bragging rights.

3. How will the Heat/Magic game play out (referring to yesterdays points of interest)? (a) When Dwight put the ball on the floor the Heat helped out, but other than that they didn’t double as much as I assumed they would, but rather just as much as they had to in order to be effective. Speaking of effective, in the first half Howard showed that his post and mid-range games are truly coming along, but (d) Miami did an impeccable job of being extremely active and closing out on Orlando’s shooters (4-24 from three) while holding them to just 70 points the whole game. (c) LeBron looked much more comfortable with the basketball as well; he didn’t rush so much and he made the correct decisions most of the time scoring when necessary (15 points) and hitting the open man whenever it made the most sense (7 assists, 3 turnovers). (b) They held the Magic to just 8 offensive rebounds while collecting 14 themselves and won the total battle 37-32. Playing at home, Miami looked like a completely different team than they had during the first two games of the year on the road. Nobody has even come close to scoring 100 points on them thus far, and it should be interesting to see how long they can keep their impressive team defense at the level that it’s been at so far. Through three games they have held their opponents to 81.7 ppg while playing two of the best teams in the East. If they continue to buy into the defensive end, the results could be frightening for the rest of the NBA. Here is a great article by ESPN’s Kevin Arnovitz that breaks down some of the principles the Heat are playing with on the defensive end of the floor.

1. Can the Pistons continue to make things interesting? Thus far, the Pistons have fought hard in their opening two games. They lost 101-98 in New Jersey and had a late lead at home against the Thunder last night before Jeff Green hit a go-ahead lay-up to seal the game 105-104. Tonight they match-up with the Bulls, a team that should be in the upper-echelon of the Eastern Conference when it’s all said and done. Can they play them close today and squeak out a W on the road

or will the Bulls pummel them after a disappointing loss to OKC on the road?

2. Which winless playoff team will get back on track: the Bucks or Bobcats? In a tight one between two teams that have to get a win, I’m going to take the Bucks at home. They played their first two games on the road and will get back on track at home against a Charlotte team that handed the game away after being up late against the Pacers at home. The Bucks were 28-13 at home last year and I think they will be fired up to get a win tonight against a team that they will be competing with for a playoff spot all season long.

3. Who will have the scariest performance of the night? On the eve of Halloween, this appears to be a two team race between Philadelphia and Washington. The 76ers have been very sporadic in their first two games, falling behind early and coming back late while the Wizards flat out looked horrible against the Magic the on Thursday night. The 76ers are playing a mediocre Pacers team in Indy while the Wizards go on the road to play an Atlanta Hawks team that has been clicking on all cylinders thus far and are playing in their home opener. I think that Washington turns in a dud and loses by a frightening amount to the Hawks tonight. The aforementioned Pistons are the dark horse in this one in Chicago.