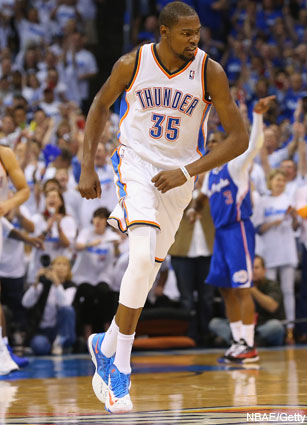 After months of morose play, the Pacers’ All Star center finally woke up, scoring a season-high 28 points, surpassing his total from the previous six games, and pulling down a Playoff-best 9 rebounds. It almost wasn’t enough, though, as the Wizards hung around until the final seconds.

Even with Hibbert playing his best offensive game of the year, Washington held a lead with just over five minutes to go in the game. That’s when the Pacers finally started landing body blows, hitting five straight shots to give themselves a cushion going into the home stretch. Clinging to a three-point lead with under 30 seconds remaining, Lance Stephenson (12 points, 7 rebounds, 5 assists), who couldn’t buy a bucket for the first three quarters, stuck a dagger from inside the 3-point line to seal the win. A triple by Bradley Beal (17 points, 7 assists) turned out to be inconsequential, as David West hit his free throws and Indiana wouldn’t allow the Wizards to get off a good look with time running out.

The Pacers played what felt like their best game in months, but they couldn’t put the Wizards in their rearview. Hibbert started out the game by hitting his first four shots, but the Wizards didn’t panic and fought back to tie it by the end of the first. And even though there wasn’t a whole lot you could say wrong about the Pacers’ first half, they still trailed by four heading to the locker rooms, thanks to solid performances from Beal and Marcin Gortat (21 points, 11 rebounds). The lead would have been bigger if John Wall (6 points, 8 assists), who struggled shooting the ball again, didn’t send a dunk high into the air off the back rim. After a 2-13 night, Wall is shooting 6-27 through the first two games of the series and has yet to hit a triple.

Despite Stephenson and Paul George (11 points, 5-13 shooting) both having off nights offensively, the Pacers stayed right in it thanks to Hibbert’s Olajuwon-lite performance in the post (save for a few airballed hooks), a solid defensive game plan that forced Washington into tougher 3-pointers than they saw in Game 1, and ball control, as they coughed it up just seven times. Wall was one of the few Wizards to get clean looks in the second half and displayed a quick trigger when he saw them, but clanked a couple of wide-open attempts in the fourth that would have tied the game. The Wizards certainly had their chances, even after the Pacers hit those five in a row to take the lead for good, but couldn’t capitalize on the road.

Despite the loss, Washington still heads home with the split and gets to play the next two in front of what is sure to be an absurdly loud crowd, with Game 3 coming on Friday night.—Brett Weisband

With 3:18 left in the third quarter, Jamal Crawford curled off a Blake Griffin screen and braced himself for one of his high-arcing pull-up jumpers at the elbow. Instead, Thabo Sefolosha picked his pocket from behind and took the ball coast-to-coast for a breakaway jam. With the thunderous OKC crowd on its feet, Sefolosha leaped into the air to poke the Clippers’ subsequent inbounds pass and the Thunder went back to work on offense.

Kevin Durant missed a good three-point look at the top of the key, but Russell Westbrook chased down the loose rebound. Without hesitation, Russ fired a triple from the right wing and screamed as it ripped through the net.

That 30-second sequence capped off a 12-3 run and epitomized the Thunders’ 33-21 third quarter. OKC first opened up a 12-point lead with a 10-2 run, forcing Doc Rivers to call a 20-second timeout with 5:47 left in the frame. After Doc didn’t see his team correct its errs, he called a full timeout just 70 seconds of game time later. After that full timeout, the Thunder emerged on their run, which featured that backbreaking stretch. It was simply OKC’s night.

After the Clippers jumped OKC in Game 1, the Thunder came out in Game 2 and played the role of aggressor from the early going. It helped that CP3 returned to the bench after drawing his second foul just over 5 minutes into the game while the MVP dropped 17 first-quarter points on the other end.

But Paul emerged off the bench in the second quarter to will L.A. back into the ball game despite having Blake Griffin and DeAndre Jordan on the bench for much of the Clips’ 12-6 run to open the second frame, prompting an OKC timeout with 6:37 left in the half. The Clippers reclaimed the lead, 52-51, on a Griffin jumper two and a half minutes later. That’s when Serge Ibaka revved up the intensity on defense, shutting down Griffin in the paint (0-2 FG, PF last 4 minutes of 2Q) and ran the floor like a damn gazelle to spark the Thunder’s transition game. OKC took a 61-56 lead into intermission and never looked back — only after the lights went out in Chesapeake Energy Arena with 27.2 seconds left in the half. They would play it out in the dim light and the lights returned for the second half.

Westbrook arguably played the hardest of all, accepting the challenge of guarding CP3 one end while initiating OKC’s powerful offense on the other. One game after shooting 12-14 overall and 8-9 from three-point land for 32 points, Paul was limited to 17 points on 6-13 shooting. Westbrook jumped out on the Clippers big men as they screened for CP3, which frustrated Paul and ultimately drew a few moving-screen offensive fouls as well.

Westbrook was sensational on offense, too. He relentlessly attacked the rim, including an enormous slam in the third, and really moved the ball well to set up his teammates far more than his 10 assists would indicate. His final assist, which gave him a triple double, was notably dubious and probably wouldn’t have counted if he wasn’t hooping at home.

When he looked to score, Russ was especially efficient posting up smaller L.A. defenders in Paul, Darren Collison and Jamal Crawford.

KD and Russ combined for 63 points, 22 rebounds and 19 assists. Ibaka had a very quiet, but important, 14 and 7. Kendrick Perkins contributed a key 8 and 9.