Led by Westbrook and Durant, the Thunder showed no remorse as OKC tied the series at 2-2. 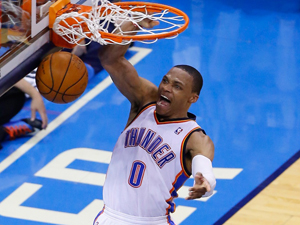 Throughout the first three games of these Western Conference Finals, we saw the home team take care of business in front of its fans. Last night’s Game 4 was no different.

The Chesapeake Energy Arena filled with sections of fans in alternating blue and white t-shirts donning “We Are Thunder” and the team’s logo was bumpin’ last night, and for good reason—uh, reasons. There was more than one thing to applaud yesterday if you’re an OKC fan.

For one, Russell Westbrook. Stat line of the night goes to this young PG. Forty points on 12-24 shooting, 10 boards, fi5e steals and 5 assists. One of his steals (although he was out of bounds when picking Tony Parker’s pockets) and resulting two points can be seen here:

For two, Kevin Durant. KD, Durantula, (the less than clever nickname) Slim Reaper, and now the one called MVP. Like his athletic teammate Russ, Durant also shot 50 percent from the field and put up 31 points, 5 boards, 5 assists and 3 steals. The dynamic duo combined for a huge 71 points, the second most scored by two teammates in this year’s Playoffs.

For three, Serge Ibaka. He scored less than 10 points and grabbed eight boards and blocked three shots last night. But aside from the stat sheet, the strength, commitment, and perseverance of Serge alone—his playing through the pain—kinda makes a diehard fan shed a tear. Claps for you, Ibaka.

For five, a 27-point lead. With 4:35 left in the third quarter, the Thunder were up on the Spurs by nearly 30 points. That’s something to smile about, but the San Antonio reserves’ ability to cut that lead by more than half to come within 12 in the fourth…not so much.

That, and Reggie Jackson going down in the first quarter with a sprained right ankle were the two main not-so-happy moments for OKC last night. Oh, and Serge probably wasn’t too thrilled with Cory Joseph putting him on a poster.

For the Spurs, the energetic run by the second unit in the fourth was something to be pleased with, and Manu Ginobili is now the lefty player with the most points scored in the Playoffs. The really good news for them is the next game at the AT&T Center, 9 p.m. EST.

While there isn’t much time until tomorrow’s game, the Spurs’ starters should be well-rested, since they sat out in the fourth in Game 4. The men of OKC, well, they’re young.

Young or old, at home or visiting—both teams need to show up hungry in Game 5. Hungry for the win and the 3-2 advantage, hungry for the WCF trophy, and hungry for a sweet trip to the 2014 NBA Finals.