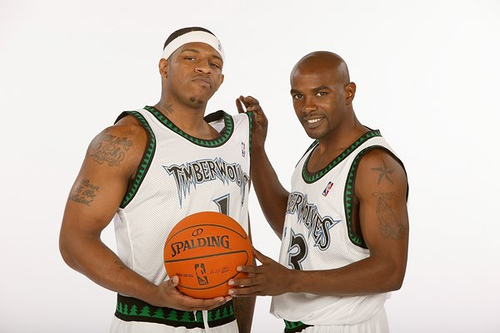 Sonia Grover from I Heart KG was kind enough to help us preview her team, the Minnesota Timberwolves.

SLAM: Should we be on the lookout for gloomy poems from Rashad about sitting on the bench now that the T-Wolves have acquired Mike James and Randy Foye?

SG: It’s unlikely that McCants’ frequent scowl belies anything but major attitude on the court. This is a dude whose first stat as a pro was a technical received for arguing with a ref. McCants was in street clothes and had played exactly zero minutes at the time.

After a much-improved second half of the season, McCants underwent knee surgery which put him out of commission indefinitely. In the meantime, in came a rookie who’s generated more excitement than the poet laureate did after being drafted. Add to that a veteran who walks around with an air of self-confidence more deserved than that of McCants. Watching those two in the backcourt while he’s hanging out on the bench, wondering when he can play again isn’t going to sit well with him. If anything, it’ll inspire poetry less like “I love KG because he doesn’t wear glasses” and more goth in nature.

Mike James as you know is an (ahem) forceful personality with occasional delusions of grandeur. How well can he fit in on a team that features an equally emotional and vocal personality in KG?

Probably no stranger to the character that is Mike James, Garnett himself called the guard this summer to ask him to sign with the Wolves. If followed by a matching level of play, James’ confident and sometimes arrogant remarks will be embraced by KG. First and foremost, Ticket wants to win. Mid-last season, Garnett apparently lashed out at one of the younger players for joking around and for what he saw as taking that night’s loss too lightly. Having a teammate who shares his sentiments and intensity will be a welcome addition for Garnett in the locker room.

Judging from Garnett’s interview with Lang for KICKS, it would seem as if this season might be his last in Minnesota should the organization fail once again to take a step in the right direction. Are you confident that McHale and co. have done enough to keep him for the remainder of his career?

McHale did orchestrate an overhaul this summer but not in the place that needed it the most: the team. Changes were made in the front office and with the coaching staff but nothing was done to help the less than impressive frontcourt. To his credit, signing James and Foye will help solidify the oft-injured and unpredictable backcourt. Unfortunately, that still leaves a plethora of guards and, so far, no one to help out KG with rebounding and defense.

In that interview, KG says, “we gotta make some more transactions man. I don’t think the summer’s over.” The preseason is now about to end and practically nothing else has been done since then. When the Wolves are in a situation where re-signing Olowokandi could be an improvement, McHale will remain firmly planted in the hot seat.

Who’s going to endure more fan abuse on the road this season: Reggie Evans for grabbing another man’s privates while boxing out, or Eddie Griffin for grabbing his own while driving?

Alright, enough foreplay, how will the Wolves fare this season?

In terms of the entertainment value, Mad Dog won’t be jacking up multiple, errant three-pointers but listening to James all season will more than make up for that loss. The only trophy for which the team is making room on its shelf is the Rookie of the Year award, certainly not the Larry O’Brien. Though not a difficult task, the team will best last season’s record but, unless more changes to the roster are made, hover around the .500 mark. Hopefully that will be enough to squeak into the playoffs but might not be enough to keep the Ticket hanging around for much longer.