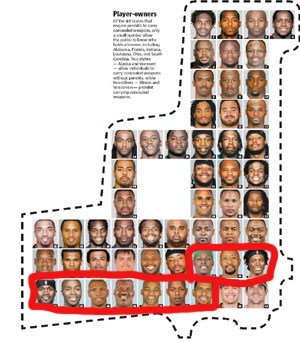 On the heels of this thorough Boston Globe report about professional athletes with licensed firearms, it is our duty to explore the NBA segment of the population. Of the 54 athletes identfied as legally packing, there are 10 from the NBA. I have circled those 10 guys in this beautiful image from the Globe. Hey, it’s shaped like a gun. I love it.

Paul Pierce. He was stabbed years ago, so you have to expect that.

Anthony Carter. He was in the CBA. Probably needed to bring a gun to the games back then.

Stromile Swift. From Louisiana. Maybe it’s to protect himself from a gator attack or the insanely high crime rate.

Shaq. He has permits in two states and he’s a cop from a military family. He probably has heavier artillery than handguns.

Vince Carter. To protect himself from all the haters.

Kurt Thomas. His permit expired in 1999. That’s so perfect coming from Kurt.

The good news, if we can call it that, is that the NFL has many more armed players. Do NOT mess with the Jacksonville Jaguars.

If you’re in Indiana, do not get caught between the Colts and Pacers crossfire. (by the way, Marvin Harrison?!?!?)
Now you know what NBA players you need to be a little more careful with when approaching for an autograph.