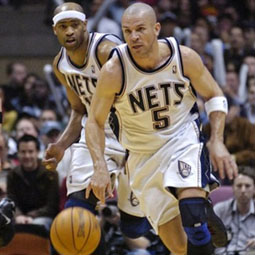 This series is, in effect, over. And the Rapts have gone about sealing their fate with a good deal of ineptitude and, in Bosh’s case, a whimper. Games 3 and 4 were essentially the same in that the series three superstars performed similarly. Jason Kidd was (as I said in the preview) the most impactful player on the floor, Vince abused anyone the Rapts sent at him and Bosh went about his game without any emotion or resolve. Hence, two blowouts that made the Rapts look no more worthy of postseason play than the Orlando Magic or injury-riddled Wizards…or the Champs for that matter.

The thing about Toronto is that you can see a squad forming, here. The 47 wins was a magnificent accomplishment, so you gotta give up props there. But part of the reason that few people – other than the legion of sensitive Rapts fans – were picking the Nets to win is because you could tell that they just weren’t ready. Even if the pieces are falling into place.

TJ Ford was sick for Game 4, after a pace-pushing, “I get my shot when I please” Game 3. If you look at the league’s top flight point guards, you have Kidd, Nash, Chauncey and a healthy Too Easy at the top, with Lil’ Chris Paul not too far behind.  After that five, you could make an argument for Ford over everyone else. Gilbert and Tony Parker aren’t point guards; they just play them on the court. And there’s no clear-cut case for going with Deron Williams, Hinrich or anyone else over Ford.  My dude Tony even mentioned that TJ should’ve been in the running for Most Improved Player, since he went from trade-bait in Milwaukee (losing time to Mo Williams) to the undisputed floor general for a squad that nearly won 50 games. Backing him up is Calderon, who had a great Game 2, made Kidd look old a few times in Game 3 and then started clangin’ in Game 4.  These two dudes are probably the most solid young PG-tandem in the league. When they’re shots fall, NJ has shown no consistent solution to stopping them. But they’ve proved inconsistent in this series, specifically when it comes to running a proficient offense. It’s cool if you can get you shot off, but can you get the struggling Joey Graham a lay-up?

The two wings are the typical, tough, athletic kats that become important cogs on contenders. If Colangelo is trying to mirror the Rapts after the Suns, then Parker is Raja Bell and that ain’t bad. Graham and Mo Pete make up a nice offense-defense due at the 3. But these kats submarined in Games 3 and 4. After Game 3, a frustrated Sam Mitchell explained why Graham was touching mad pine for most of the second half. To paraphrase, he said Graham wasn’t getting it done, that Joey’s only job was to find Jefferson when a shot went up, so that Jefferson wouldn’t streak down the court for transition buckets. Graham wasn’t doing that, so Mitch sought other options. Meanwhile, Vince was making Parker his son. You get the feeling, though, that you might get some better performances next year.  Inexperience was usually the first reason cited for why the No. 2 seed was gonna get sent home in early May…and it wouldn’t even be considered an upset.  Parker and Graham’s performances have been indicative of this.

Everyone on the Raptors squad was submarining, but none worse than Bosh. The thing about Bosh is that he’s such a finesse dude. I wondered in the series preview whether the Nets big men would bother him, rough him up, and get him off his game. And that’s what has happened. Mikki Moore and Jason Collins are good for nothing other than physicality. They don’t bring skill, they bring brawn and they play their roles well. Bosh is a skinny dude to begin with, but he also lacks that friskiness, too. Time and again, during these last two games, he gets muscled off the block, ends up getting the ball 20 feet from the bucket and ends up shooting jumpers. When he’s making those shots, cool…when he’s missing, it’s not cool. And in Games 3 and 4, he’s not even taking the shots. He attempted a total of just 22 shots between Games 3 and 4 and it wasn’t because he was on the bench in foul trouble.  He’s uninvolved and it’s because he seems to lack resolve.  Resolve (or will, or heart) is a salient trait amongst the superstars of the League. It’s what allows them to impose as opposed to being imposed upon. Even when Bosh is knocking down the 18 and 20 foot jumpers, those buckets don’t carry the same import and weight as bucket scored in the trenches. It makes matters worse when Bosh demurely trots up and down the court.  KG had (maybe still has) the tendency to operate too far away from the basket on the offensive end, but at least he’s ultra-emotional.  When he dunks, he fumes.  Bosh follows his dunks with stoicism. There were two cases in the first half of Game 4, with the Rapts down by double-digits, where Bosh caught a couple passes down low and yammed on the sleeping Nets interior. It was at those moments when he should’ve started growling and cursing and stalking and letting the rest of the squad know that it was time to get it poppin’, show his squad and the Nets that he wasn’t scared.

Except, he was scared and maybe even unprepared. Steve Kerr reported that Bosh mentioned how the intensity of the playoffs surprised him. It’s comments like these that made me sure the young Rapts wouldn’t beat the vet Nets four times in the Playoffs. But then moments later, David Aldridge reported that Bosh claimed his nerves were wrecked. This is the franchise player spouting this to the media.  If that’s how Bosh is carrying this new experience, then Toronto has no chance.  Maybe next year, fueled by this embarrassment, things might go differently, but it’s obvious the Rapts – chiefly Bosh – weren’t prepared.

If you couple this with the recent Vince-brilliance and the continued excellence of the best point guard in the League (Kidd is averaging a triple-double for the series and 16-16-12 for Games 3 and 4), then that spells doom for Toronto.

Now, Kidd probably won’t hit 5 of 6 treys on Tuesday and Carter could quickly turn back into a jump-shooter and the Toronto faithful could imbue the Rapts with new life…a bunch of things can go differently in Game 5 and end with a Toronto win. That is far from an unlikely scenario. However, the Nets are clicking and Toronto appears to be a squad full of “Shook Ones”. I said Nets in 5 from the jump, didn’t I?