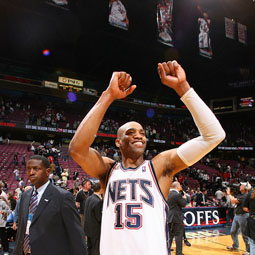 Vince Carter is usually the kat that takes those last-second, potential game-winning shots, but it was only right for Frank to make the call for Jefferson. He’s been in attack mode all game (11-12 from the free throw line) and on the previous possession with the Nets down 97-96, Carter chose to pop a 21-foot jumper early in the shot clock under the guise of getting a 2-for-1. But then, of course, Bosh did the same thing on the Rapts end, setting up Jefferson’s game-winner – a spinning-left, finishing-left G-move that only prefaced the “true” game-winner: Jefferson’s steal/interception on the very next possession that sealed the game.

Let’s be real, New Jersey moving on is not an upset. Most people expected this, even the Nets themselves. They’re general demeanor after the game was businesslike and I’m betting there was little celebration and a lot of thought about the next opponent, Cleveland, a more formidable foe. But Lawrence Frank did articulate what should be wide sentiment regarding Toronto’s season, specifically given their valiant Game 6 effort. As soon as he sat down to address the media, he told us he wanted to say something before taking questions: “I want to acknowledge Toronto, who had an unbelievable season…When the dust settles, it’s unbelievable what they did in terms of integrating nine new faces, having a difference of 20 wins. They had a phenomenal year.”

Toronto was “this close” to throwing everything they had accomplished this season out the window, by giving us a cupcake performance highlighted by a soft Chris Bosh doing his best to impersonate Brad Sellers. But this Game 6 was a stalwart performance from the Rapts and that’s not me throwing some moral-victory albatross around their necks. On the real, I expected for Jersey to throttle them. Instead, Toronto always stayed in the game, battling back from moderate deficits and a crowd that (by the second half) was finally providing a playoff atmosphere. Calderon and Ford were the illest of 1-2 punches at the point, dropping a combined 33 points. And Bosh finally stopped acting like a sissy, manned-up stayed an aggressor the whole night. He shot horribly, but the fact that he put up 22 shots, many coming on second half drives to the cup, was a sign that he’d learned his lesson. In fact, he spoke about learning lessons in the post game interviews.

I asked him exactly what he learned from the postseason and he responded plainly: “Playoffs are extremely hard. They’re long, grueling. But you can’t get frustrated. No matter how well you’re doing, it’s still hard.” He said all this with an expression on his face that belied a young man aware that he had fallen short in some instances, but given his best effort…like a child after a tough science exam responding to a parental inquiry about how it went. But make no mistake: Bosh is going to come back infinitely better next postseason. His demeanor still worries me, but he finally showed some rawness that the Rapts need. Combining that with Ford/Calderon, the versatile and improving Bargnani and tough wings like Parker and Mo Pete – that’s a very solid nucleus. It was just too soon to expect them to oust a veteran – and star-studded – squad like New Jersey.

Turning its attention to the next round, New Jersey already seems certain that Cleveland will be a dog fight. For one, Kidd goes from getting big-time challenged defensively by quicker guards (but having his way offensively) to the prospect of Cleveland throwing the likes of Eric Snow and Larry Hughes at him (even if his defensive duties will ease). Anytime Kidd is troubled on the offensive end, the Nets will stall. This could be a problem. Carter meets his match and then some with LeBron and the Jersey bigs won’t be bailed out by jump shooting big men with players like Z, Gooden and even Marshall prone to mixing it up.

Jefferson summed it up best: “Toronto is a great team. Cleveland is a better team. We go from Chris Bosh to LeBron James. It doesn’t stop.”

Random notes
— I passed Tony Soprano and Raekwon in the halls. Galdofini was with his son and dressed nowhere near as dapper as his Soprano’s character. Nor was he an imposing figure. I’d get him just like Bobby did in the Season Premier. Raekwon was chilling in a corner, talking to Meadowlands personnel about the DeLa Hoya – Merriweather fight. Of course he’s a Floyd fan.

— The Raptors contingent was more vocal than the Nets fans for most of the game, including a row of four teenagers near press-row that continued to chant (in all their Canadianess) “V-C-SUCKS!” every chance they got.