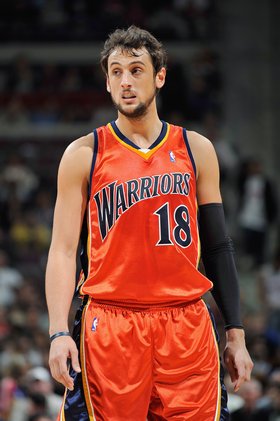 The wheeling and dealing of this wild offseason is evidently far from over, as evidenced by the Warriors basically giving away Marco Belinelli to the Raptors (does Devean George even still count as an NBA player?)

Although Raptors GM Bryan Colangelo is said to be in love with Belinelli’s game, like many moves in the NBA these days, this was yet another financially-driven one. The Warriors are going to save themselves a bit of loot, as explained by FanHouse:

The Warriors traded shooting guard Marco Belinelli to the Toronto Raptors for small forward Devean George and cash considerations. The deal will be announced on Thursday, according to a source.

The cash considerations are that the Raptors will pick up most of George’s contract, worth $1.6 million in 2009-10. To that extent, George will be helpful to the Warriors even if he never plays a game for them. It certainly goes further in explaining why the Warriors would give up on Belinelli, just 23.

The 31-year old George (and his coveted expiring contract) averaged a shade over 3 points per game last season, while Marco dropped in just under 9 points a night.

Belinelli, a young and talented shooter, becomes the fourth European player on Toronto’s roster. He’s set to earn about $1.5 mil next season, with a team option the following year.