There’s a certified buzz around State Farm Arena. It’s the Atlanta Hawks’ home opener and radio stations and marching bands are blasting music outside. Inside, things are even crazier with fans and media ogling over a facility that’s unveiling a $200 million makeover, the second-biggest renovation in NBA history.

This rehab called for a full gutting—we’re talking new concourse layouts, new TopGolf suites, a new jumbotron roughly the size of Cobb County, new everything. There are so many changes to the former Philips Arena that, when an usher hands out souvenir programs, everyone excitedly grabs one for the map inside.

The team brought in a bright new face, too, and it belongs to Trae Young. In this rebuilding season—literally and figuratively—the super-gifted kid out of Norman, OK, is going to be responsible for some fun times around the gym. But he’s 20 and hasn’t met a 30-footer he doesn’t like, so there are destined to be a few frustrating moments as well. The Hawks know this. They only hope that the energy the fans show in the stands after a dope crossover doesn’t completely dissipate after a dumb turnover. 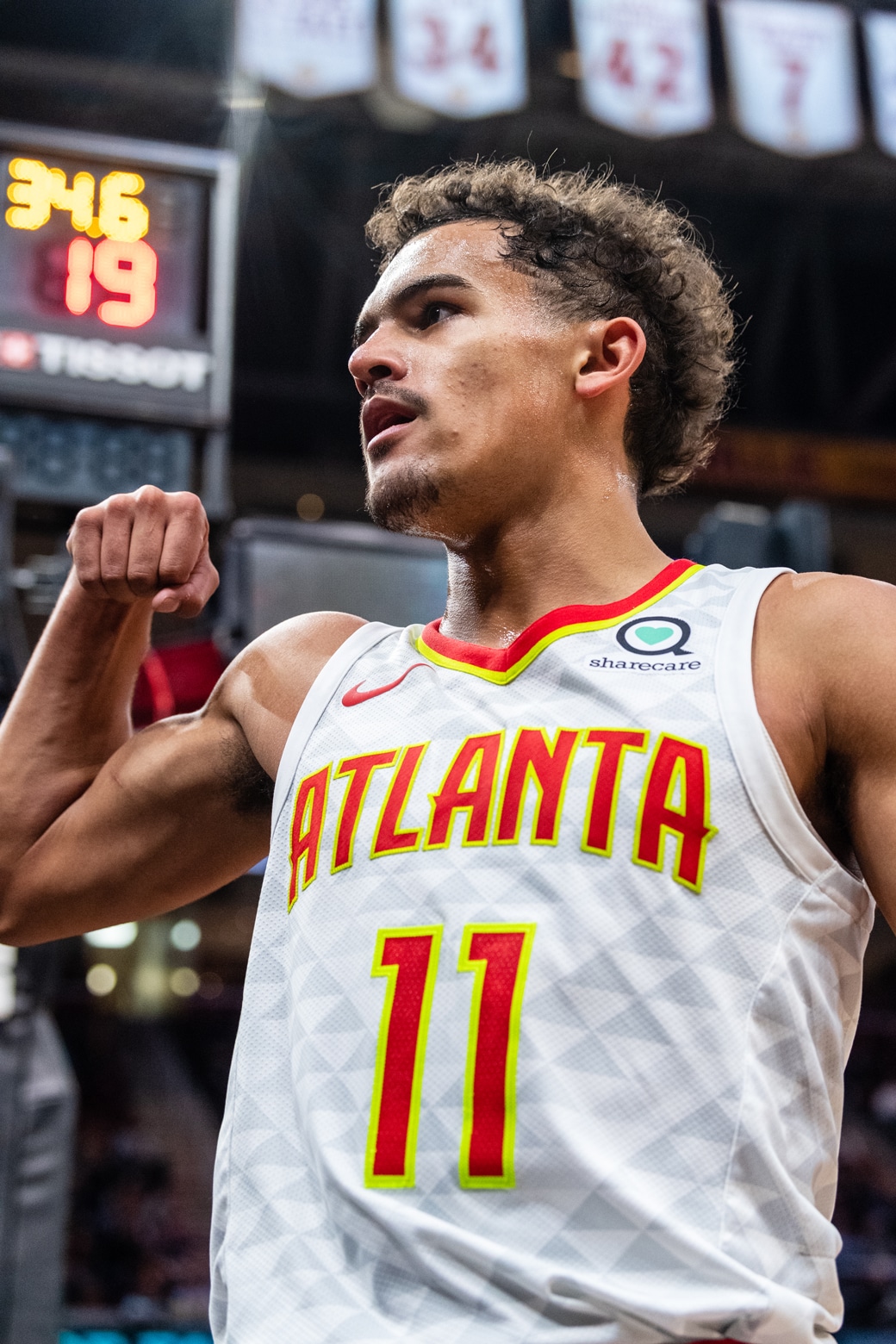 The whole organization knows what Trae means. Follow the aroma of grilled chicken and freshly baked brownies down to the sleek, floor-level Chef’s Club and you’ll run into Joe Schafer, the executive chef for the venue’s entire culinary program. This man leads a staff of hundreds for every State Farm Arena event, but even he knows that there’s another person in the building with much more on his plate these days.

“[Trae’s] amazing,” says Schafer, of the franchise-building point guard whose face is already plastered on billboards across the city and, of course, on the cover of tonight’s program. “He’s a little phenom. You never know what to expect in any sport when you draft. You never know what you’re going to get, but I’m excited.”

Everyone’s pumped. Until they aren’t.

At this point Young’s backstory is old news. Introduced to the masses last year at Oklahoma during a freshman campaign in which he showed the moves of Steph and the range of Sprint, Young literally did things previously unseen in college—like being the first player to lead the NCAA in points and assists in the same season. He had offensive outbursts of 43 and 39 before New Year’s Eve, but as defenders wised up, those numbers came down. Kinda hard to do your thing when you’re double- and triple-teamed every possession, right?

But even with the stats tapering off toward the end of the Sooners’ season, the Hawks never wavered in their feelings for Young. According to many reports, Trae was the guy that Atlanta wanted from jump—so, when the Draft came, the franchise had no problem with trading its No. 3 pick to the Dallas Mavericks in exchange for the No. 5 selection and a future first-rounder. The Mavs took Luka Doncic with the third choice.

“Two of our goals in the next few years is to accumulate as many assets as we can and to get as much talent as we can,” Hawks GM Travis Schlenk told the Atlanta-Journal Constitution before the season started. “Luka is a heck of a player; we were happy with him. Trae is a heck of a player; we are excited to have him. When the opportunity came to pick up a first-round pick from the Mavericks, it just kind of made sense to accomplish both goals with one move.” 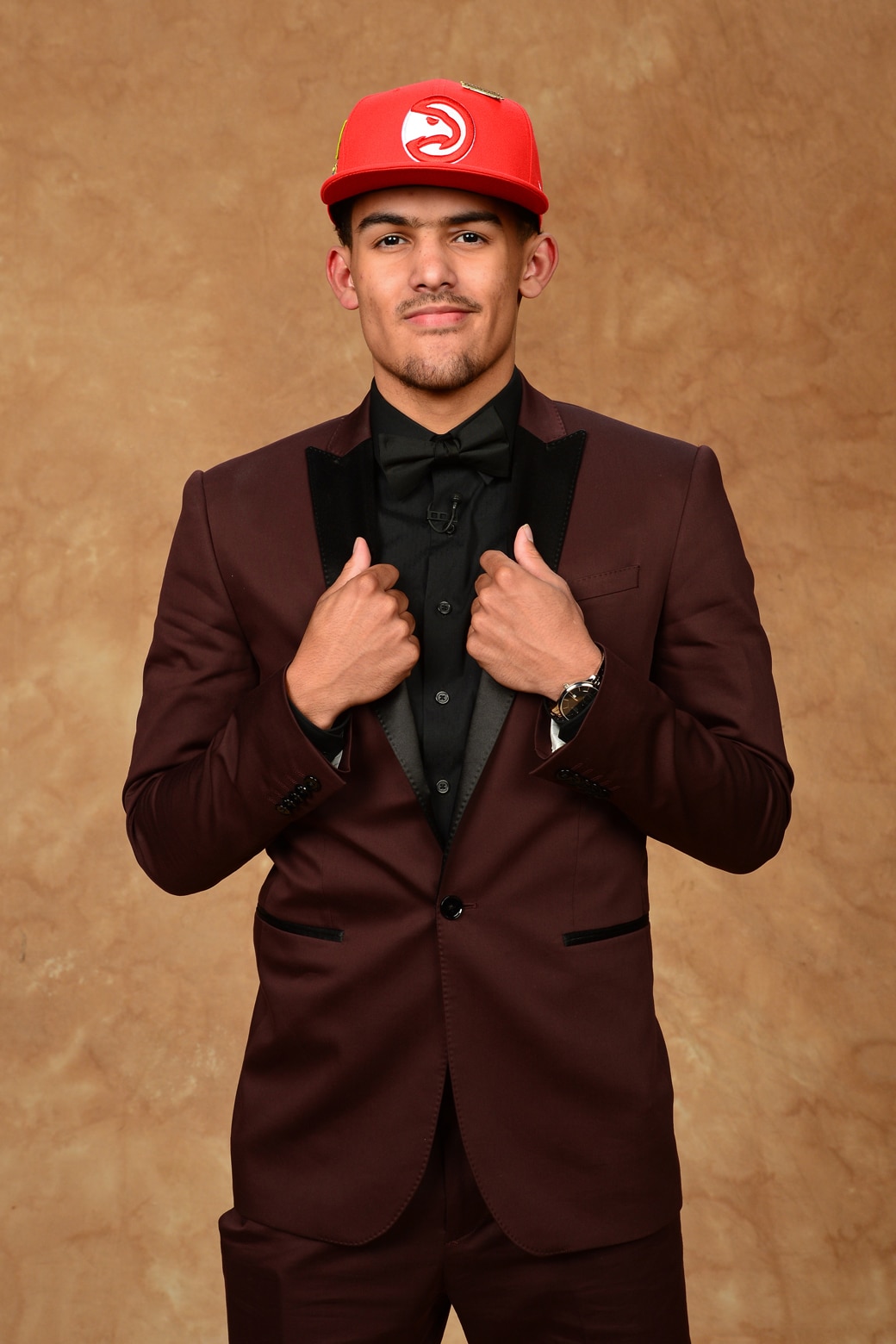 Most of your favorite hoops bloggers said the Hawks royally effed up with the transaction. Doncic, a EuroLeague sensation, was deemed a once-in-a- generation talent. He was 18 giving 28-year-old vets 20 and 8 every night. How could Atlanta not stick with him?

When the NBA Summer League started, those rumbles only grew louder—even though Doncic sat out for the action. Young, on the other hand, was out there getting his every move dissected by analysts. He averaged 12.7 points on just 23 percent shooting in Utah. The haters couldn’t get to Twitter quick enough.

When he got to Vegas, however, Young’s game took off. He averaged 17 and nearly 7 assists in four games. The shooting percentage jumped tremendously, too. Things got quiet on the timeline.

By then, though, Young and his many supporters—one of the loudest in the camp was Denver Nuggets rookie Michael Porter Jr., whose friendship with Trae goes back to their AAU days—were fed up with the jokes and negative jabs. Porter Jr told us followers to “keep that same energy” when Young inevitably took off; Trae rocked a hoodie that said “Keep that same energy” not long thereafter.

Everyone’s quiet. Until they aren’t.

It brings us back to the Hawks’ home opener. Of course, it’s vs. the Mavericks. Trae Young vs. Luka Doncic. The scheduling gods would not have had it any other way. Doris Burke and the ESPN crew are here. The Zac Brown Band is doing the national anthem. Future is performing at the half and postgame. Feels almost playoff-ish. 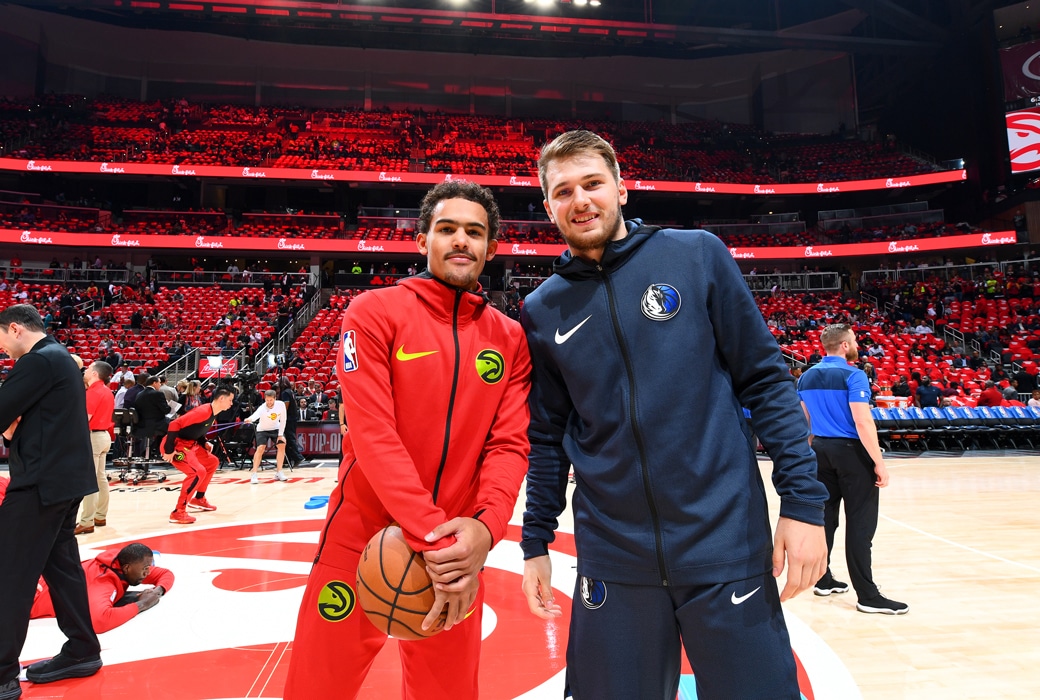 Trae started a little off. He’s handsy and anxious. Three fouls before the 10:00 mark in the second. He sat down with 5 points. At one point in the first half, the Hawks were down by 26. Doncic, on the other hand, was poised beyond his years. You can already see where this is going.

The Hawks’ first-year head coach, Lloyd Pierce, must have given a Rudy-esque halftime speech because his squad came out fired up in the second half. Taurean Prince and Kent Bazemore held things down in the third quarter while Young played with a sense of urgency in the fourth, showing off some zip with his passes and his underrated knack for drawing fouls in the paint. There was even a rewind-worthy moment when Dennis Smith Jr got all discombobulated during one of Young’s silly dribbling exhibitions. Doncic finished with 21 points. Young ended with 17 points and 5 assists and his Hawks got the comeback victory.

“People are going to look and say that [Doncic] scored 4 more points than me and that makes him better,” Young said after the game. “Well, I’m glad my team won. I’m glad our team came out on top. That’s the main thing for me.”

We won’t overly simplify things too much by calling the meeting a metaphor for Trae’s young career—a hype-filled start, shaky moments, strong comeback, eventual triumph—but you can’t help but recognize the resilience.

“Those first three quarters, when you’re in foul trouble, your rhythm isn’t going,” said Young, surrounded by local reporters. “It’s tough. Luckily, I have great teammates and veterans who just told me to stay the course. When the fourth quarter came, I knew I had to show up and play for my teammates.”

It’s no coincidence that new Hawks forward Vince Carter has a locker next to the celebrated rookie. From in-game inconsistencies to the post-game media smothering, the 21-year vet has seen it all before, so he’s taken it upon himself to help Young navigate through the clutter.

“We sit beside each other in timeouts or whatever,” said Carter about Young, who sandwiched that night’s performance between a rousing 35-point showing against Cleveland and a rough 3-12 effort versus Chicago. “I make sure we communicate. It’s something I want to do. He asks me questions and I enjoy that. That lets me know that he wants to get better. He doesn’t want the stage to get too big. He’s definitely humbled himself by saying, Hey, teach me the ropes. He’s going to put it together and mold into one great player.” 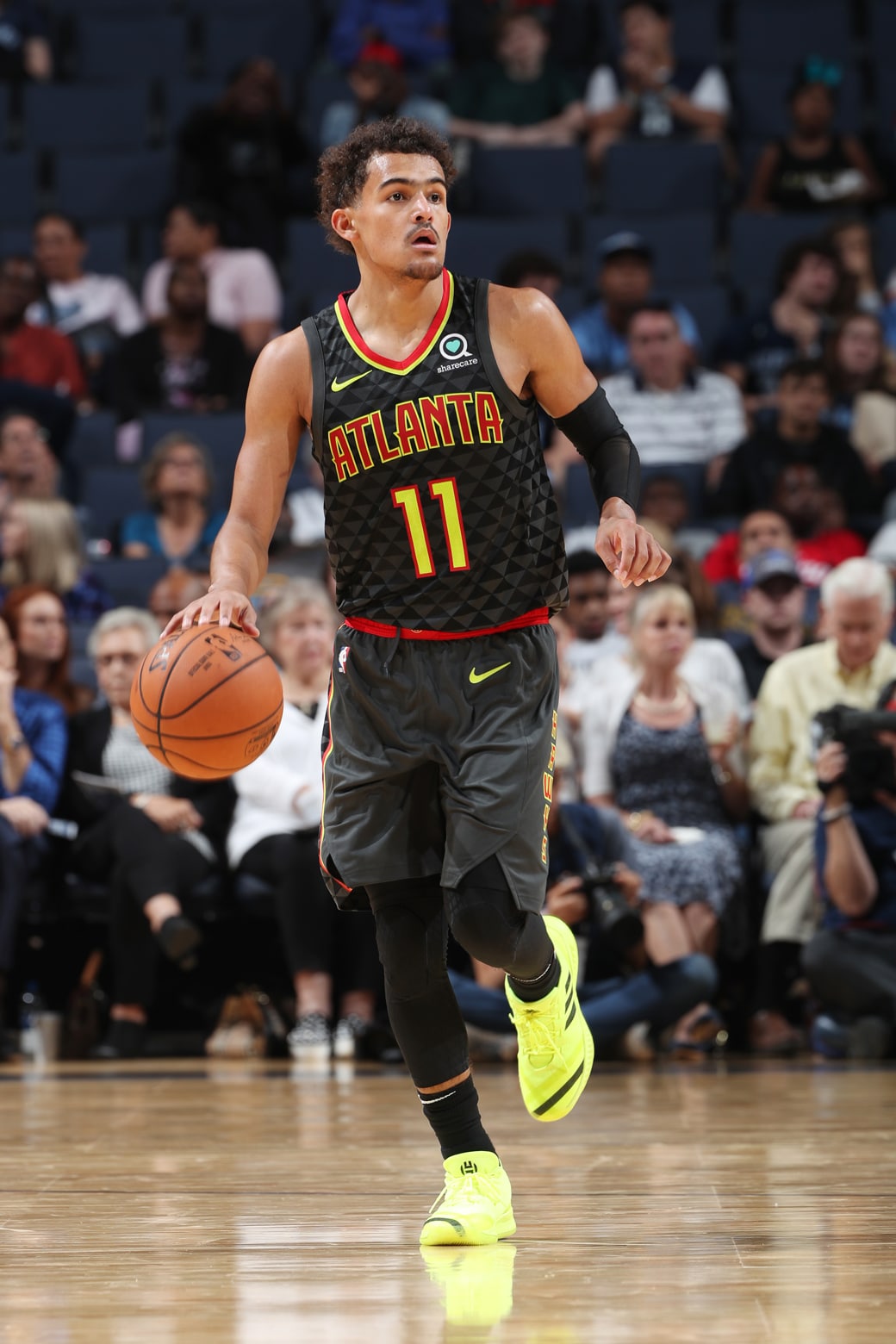 But even with the highs and lows that will define Young’s rookie season, the 20-year-old has been exactly what the Hawks organization has asked for thus far. He’s scoring, passing and generally getting folks around Atlanta energized about basketball again. “This was a big game for me,” Young said. “I wanted to win for myself, my team and this city.”

“It’s a long season,” Carter added. “You’re going to have bad nights. You’re going to hear people say, Maybe you’re not this type of player. Just stay the course. Just like that, that meter turns the other way and you become the great Trae Young that everybody wants to see.”

Young will have a few more uneven games, fueling the “Doncic was the better pick” narrative further. But if we’ve learned anything from watching this kid over the past year or so, it’s that if Trae keeps being Trae, he’ll have the final say.

“I always play with that chip on my shoulder, that lil’ nastiness,” he said. “I just play and compete.”

While always keeping that same energy.