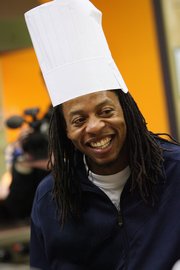 Say you’re a pro athlete. I figure you know more than 100 people. I’d say that at least 75-80 of those people you consider to be your friends. You know, the kind of people who offer you support, have a kind word to say after a tough game, are willing to fend off the unwanted groupies…and will probably buy your rap album when it comes out. Not if your name is Troy Hudson.

Timberwolves guard Troy Hudson’s first rap album, “Undrafted,” sold 78 copies in the first week after it was released on July 17.

That’s gawd-awful. 78 copies?! I’m no celeb and I bet I could sell more copies if I came out with an album. OK, that’s a lie, but still…78? Terrible. Especially for a guy who takes his rap career so seriously.

I’m not sure if this has anything to do with his (lack of) skills in the booth, but the Wolves have bought out T-Hud’s contract.