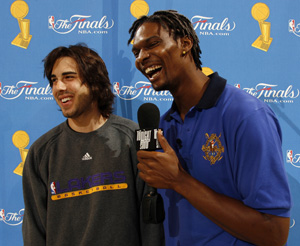 It’s entirely possible Chris Bosh is the opposite of everything we say he is.

For all the things right with Bosh, there are persistent murmurs: Is he strong enough? Is he

domineering enough? Is he even a franchise player? His body of work – though impressive – leaves him stranded somewhere in the middle on all those questions.

Myth: Chris Bosh isn’t tough.
Truth: In a physical sense, no, Bosh isn’t that tough. He may be 16 pounds heavier than the day his rookie year ended (up 34 from Draft Day ‘03), but Bosh has had a difficult time shaking the soft label, the lack of toughness label, and the Stephen A-inflicted Bol-build label. There are traces in his game that suggest soft – his perimeter preferences; a fondness of shooting from the elbow more than the low block; his low-ish boarding totals. It’s probably something he won’t shake easily, if at all.

But Bosh is tough in other ways.

CB4, at 19, spent his rookie year on a bad team with 22 (!) different teammates. He endures the nightmare that was Vince Carter’s final year as a Raptor. He was the best player on a very bad team in 2006 – Bill Walton once said that’s without doubt the worst position for any player to be in. He has the responsibility of not only an entire franchise, but really, of a country (not you’re average NBA situation). He even battled a chronically sore left knee the past two years, yet his numbers – 22 and 9 on 50 percent shooting – sure don’t reflect it. He’s been one of the main reasons basketball is relevant in Canada again. If that’s not tough, what is?

Myth: Sam Mitchell is the wrong coach for Chris Bosh and the Raptors.
Truth: Mitchell was one tough dude during his playing days, but his best player (Bosh) certainly isn’t the first guy most associate with hard. So is there really anyone better equipped to guide Bosh than Mitchell? Not likely. Even after earning Coach of the Year honors in 2007 (and a contract extension), outsiders still speculated Mitchell might not be the right man for the Raptors’ personnel.

Mitchell has been so demanding of Bosh these past few years it’s almost frightening. But the results are unavoidable: A division title, two trips to the Playoffs, three All-Star appearances for Bosh. For what it’s worth, in the duration that CB4 has played under Mitchell, he’s scored more points than Duncan, grabbed more boards than Amare, and raised his game to a level matched by only a precious few at his position.

Myth: Bosh is fine as the stand-alone leader in Toronto.
Truth: Chris Bosh is the Raptors best player, that can’t be questioned. But is he their franchise player? There’s a difference. Some guys are dominant enough personalities where they can be both. And there’s some who aren’t. Honestly, I don’t think Bosh is that guy. That’s not a knock on him, it’s

Mike Finley was a stud in Dallas, but look what happened when Nash and Nowitzki joined him as All-Stars. Elton Brand may be a lock to average 20-10 from now until eternity, but it wasn’t until Sam Cassell (in 2005-06) arrived in LA that he – and his Clippers – reached their best. Watch how good Andre Iguodala will be this year for Philly with Brand around. Just know this isn’t necessarily a bad thing, it’s just an observation.

So why isn’t Bosh that guy? Because he’s not the type that would rip the clipboard out of Mitchell’s hands during a timeout in the fourth quarter of a close game and demand the ball. Or get in Calderon’s face when he hasn’t seen the ball down low in the final minutes. Or put up 25 and 10 for a 50-win team in the East, get home-court advantage, and take his team deep into the postseason.

Does Chris Bosh have it in him?

Until proven otherwise, probably not. But thankfully, he’s got a nice frontcourt addition (Jermaine O’Neal, who’s still only 29 remember?), a pass-first point guard (Jose Calderon) whose eyes will be finally fixed forward instead of over his shoulder, and a solid supporting cast that can make noise in the not-so-formidable East. So if you think Bosh is a franchise player, just realize, he doesn’t have to be.