Tweeting About the Knicks 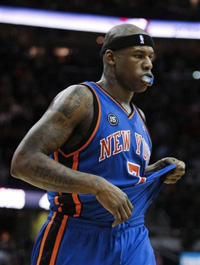 About a month ago I wrote a positive post about the Knicks. They had an optimistic 9-6 December and started 3-2 in January. They were within striking distance of the Playoffs and all cylinders seemed to be clicking.

My post was published on January 13, hours before they were about to tip off against the 76ers. Since that date, they finished off January with a 2-7 record and, midway through February, are 1-2.

Now, like most of the SLAMfam, I tweet basketball. Most of my tweets are dominated by the Knicks. So, instead of writing a thousand word rant about the annoying, pitiful state of the Knicks, which might lead to my laptop burning up because the rant might be too flammable, let’s look to the evolving nature of the tweets, as the Knicks progress from winning to losing.

January 1: Knicks beat Atlanta; *Nate returns and goes off for 41
The #Knicks were also 8-6 the entire time Nate was benched, including their last game with the Hawks where they won w/o him. So… 10:06 PM Jan 1st

January 3: Knicks beat Indiana; *Crush Indiana
It really is embarrassing for the #Pacers at this point. 101-59 and we’re still in the 3rd. Garbage time for #Knicks bench please. 7:39 PM Jan 3rd

January 7: Knicks beat Charlotte; *On vacation
January 9: Knicks lose to Houston; *Still on vacation
There are four babies on this flight. All near me. #seatingdisaster 11:10 AM Jan 5th

January 11: Knicks lose to OKC; *Duhon guards Durant
@ptknicksblog That and they succumb far too easily to a star player. They stand around and watch said player go off. 8:38 PM Jan 11th

January 16: Knicks lose to Detroit; *In Detroit
January 18: Knicks beat Detroit; *In New York
These are the games the #Knicks need to win, against sub .500 teams, if they want any chance to sniff the playoffs. 1:13 PM Jan 18th

January 22: Knicks lose to Los Angeles (Lakers); *Spat with Jordan Hill hours before the game
What have you done? You’ve doomed us all. RT @jordanchill43 61 Ha not tonite! 2:22 PM Jan 22nd

@ptknicksblog Maybe if I keep up the pessimism the #Knicks will keep playing well. #oppositesday 8:33 PM Jan 22nd

January 24: Knicks lose to Dallas; *I reach my breaking point with Duhon
@bandwagonknick It’s a moot point at this stage of the game. His defeated vibes are coming through my tv and killing me. 2:39 PM Jan 24th

@bandwagonknick I’m just going to be impartial today and blame everything on Duhon. His #’s over last 8, including today, are just…vomit. 2:50 PM Jan 24th

January 26: Knicks beat Minnesota; *Knicks are up 40-16 after the 1st quarter
Beer and the #Knicks game. Always a decent way to spend the night. The beer also helps for when they fall apart, which is often lately. 7:41 PM Jan 26th

Beer also tastes better when #Knicks have a start like this one. 7:47 PM Jan 26th

January 28: Knicks lose to Toronto; *Down 2 and the Knicks have the ball on the final possession
I won’t lie, I just threw my remote at the tv. WHAT.WAS.THAT. 10:04 PM Jan 28th

January 30: Knicks lose to Washington; *Depression sets in
I just sat through this entire #Knicks vs #Wizards game. If I didn’t want to drink before it started, I sure do now. 10:14 PM Jan 30th

February 3: Knicks beat Washington; *There’s a game on?
Man, you can get the Garden crowd to chant anything. 9:08 PM Feb 3rd

February 6: Knicks lose to Cleveland; *Snowmaggedon strikes the East Coast
I was shoveling out my car and remembered the #Knicks game was on, so I came inside. Yup, I’m gonna do a bit more shoveling. 8:17 PM Feb 6th

I don’t know if the tweets actually demonstrated a trend, or if this worked, or if a lot of you are even up on Twitter, but let me know what you think.