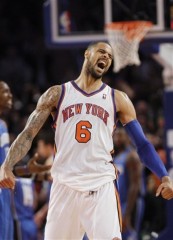 The New York Knicks haven’t been on the receiving end of very much good news of late. In fact, most of it has been downright calamitous.

Today, however, something Knick-related can finally be celebrated. Tyson Chandler will be named the NBA’s top defender for the 2012 season.

Yahoo! Sports reports (and the AP also confirmed the award):

New York Knicks center Tyson Chandler has won the NBA’s Defensive Player of the Year award, a league source said. The Knicks plan to make the announcement official Thursday at their practice facility. Chandler will receive the award Thursday night prior to Game 3 between the Knicks and Miami Heat.

Chandler averaged 11.3 points, 9.9 rebounds and 1.4 blocks in his first season with the Knicks.

UPDATE: The NBA confirmed that Tyson Chandler did indeed win the award this afternoon:

Chandler becomes the first player in franchise history to earn the honor. Chandler received 311 points, including 45 first-place votes, from a panel of 121 sportswriters and broadcasters throughout the United States and Canada. Oklahoma City’s Serge Ibaka finished second with 294 points and Orlando’s Dwight Howard, who had won the award each of the previous three seasons, finished third with 186 points. Players were awarded five points for each first-place vote, three points for each second-place vote and one point for each third-place vote received.

With Chandler anchoring the middle, New York’s defense improved markedly from the previous season in multiple categories. The Knicks ranked among the top half of the league in several key defensive categories, including opponent turnovers per game (17.0, 2nd), opponent field goal percentage (.442, 10th), and opponent scoring (94.7 ppg, 11th). Opposing teams averaged 22.5 more points and shot .520 from the field when Chandler was not in the lineup. Opponents shot .438 with Chandler in the lineup. In addition, Chandler grabbed 22.1 percent of his team’s defensive rebounds when he was on the floor.

The Knicks will need Chandler’s extraordinary defense, and then some, to have any hope of extending their first round Playoff series with the Miami Heat. Game 3 tips off at Madison Square Garden tomorrow night.