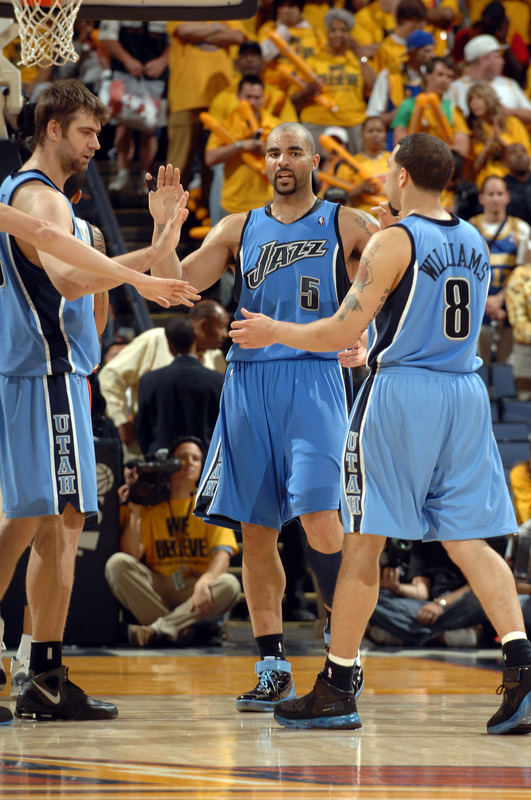 -What another great Playoff game in Oakland. It’s a shame this was probably the last one this season.

-Thanks for not allowing Reggie Miller and Dick Stockton anywhere near the building, TNT. Thank you very much.

-Carlos Boozer is a MAN. I don’t really know any other way to describe him. It’s too bad he’s been ravaged by injuries the last few years, because he is one of the most talented and relentless players in the League. A joy to watch.

-Even after Baron Davis hit a rain-maker of a three to close out the third quarter, Utah had the momentum going into the final period. They had withstood the crowd’s energy; the pace of the game was to their liking; Boozer was beasting on everyone; and they were grabbing every board in sight.

(As for Baron, he’s had such an amazing Playoff run that it’s now almost shocking when he has an off night. 6 for 16 shooting from the field will not cut it in Game Five and he knows it. “I just didn’t find it,” Davis said. “It’s all on me. It’s not on my teammates. It starts on me and ends on me. I have to assume the responsibility for this.”)

-Now, I love Stephen Jackson, but he really hurt his team last night. It’s OK to pass the ball from time to time, Stephen. I Promise.

(I understand being frustrated about not getting calls — and Jackson had a legitimate case on a number of drives to the hoop — but you can’t start jawing at the refs while you have the ball and your team is trying to run its offensive sets. That’s just common sense.)

-How many times are the Basketball Gods going to smile upon Derek Fisher this postseason? You just knew he was going to have a big say in the game’s outcome when he hit that enormous three to give Utah an 89-87 lead with about eight minutes to go. Andris Biedrins had just scored on a dunk inside, and the crowd was going bananas, but Sloan decided to pull a Phil Jackson and left his team on the floor to try and figure things out. Fish then got open for a split-second before wetting a deep baseline three. There is ice water coursing through that dude’s veins.

(When Fisher and the rest of the Jazz shooters began sucking the life out of the Warriors, TNT got some fantastic crowd-reaction shots. The message was written on the faces in the stands: Our guys are in big trouble and this series might be over.)

-The Warriors made 12 three pointers but missed 27 of them. Utah, thanks to their size advantage, swallowed up the long rebounds and this led to a number of easy baskets.

-Utah is the better team in this series. This has never been in doubt. Someone on Inside the NBA brought it up after the game, but Don Nelson had already said it about his squad: They don’t have a Plan B. They’re going to run and bomb away until the shots stop falling. Live by the three, die by the three. In Game Four, the long range bombs stopped falling and they lost.

(Utah has the talent and depth to play pretty much any style; start running like crazy, and they’ll run along with you. Try and slow it down, and they’ll pick-and-roll you to death.)

-The Golden State Warriors will be playing a desperate brand of basketball in Game Five and it’s going to be one hell of a showdown. But now that Utah has passed their hardest test so far — winning inside the madhouse that is the Oracle Arena — you have to like their chances going back home.